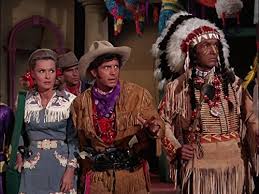 Meanwhile, back at the ranch, Western villain Shame (Cliff Robertson) shows up for the third season’s final two-parter, courtesy of Stanley Ralph Ross. The frontier felon is accompanied by a new posse: a mostly silent Indian, a Mexican bandido who talks with a British accent, new girlfriend Calamity Jan (Dina Merrill, one of the few moll-actresseses to get top billing), and Calamity’s mother (ensuring lots of mother-in-law jokes). Calamity breaks Shame out of jail with the help of a tank, the first jailbreak seen since “The Joker is Wild.”

Shame sends the Terrific Trio a clue to his next crime: that he plans to rob the Gotham Stage. This proves to be a feint: instead of holding up the attendees at a stagecoach recreation, the owlhoots assail the local theater (where the doorman is played by Jerry “Leave It to Beaver” Mathers). The three heroes show up and battle Shame’s gang, but the women’s auxiliary—Calamity and her mom Frontier Fanny-- paralyzes the crusaders with fear gas. With all of the heroes scared of their own shadows, Shame takes Batgirl hostage as protection against the cops. Though Batman and Robin are almost incapacitated, they somehow manage to drive to the Batcave, where Alfred neutralizes the fear gas with a convenient antidote. The two heroes figure out Shame’s hideout, but the villain deserts the hideout with his henchmen and his hostage. By chance Frontier Fanny gets left behind, and this leads to the heroes’ attempt to trade Fanny for Batgirl. The first segment ends without an explicit death-trap, though the apprehension of Fanny sets up the action of the second segment, wherein Shame tries to assassinate his enemies during the hostage exchange.

One of Batman’s many Bat-toys preserves the heroes’ lives, but though the villains escape again, Batgirl, who’s recovered from the fear gas sans antidote, is liberated. Batgirl reveals that she heard Shame talking about a “great train robbery,” and Batman deduces that the frontier felon plans to hijack a load of discarded bills being sent by train to the treasury for destruction. The information comes too late to prevent the heist, so Batman seeks to draw Shame by challenging the vain villain to a personal duel. Shame accepts with the intention of bushwacking the crmefighter. Batman honorably goes it alone, but Robin and Batgirl trail him, knowing that Shame won’t play fair. While Batman’s allies neutralize the henchmen, Batman and Shame enact the series’ only one-on-one battle.

In fact, all of the fights in the episode are above-average for the third season, and this may testify to the pervasiveness of the western-hero myth and all of the concomitant tropes. The script doesn’t come up to the mythicity-level of “Londinium Larcenies,” but like “Wail of the Siren,” “Escape” is as well-constructed as any of the better episodes of the first and second seasons.

Posted by Gene Phillips at 1:08 PM
Email ThisBlogThis!Share to TwitterShare to FacebookShare to Pinterest
Labels: combative adventures, the marvelous