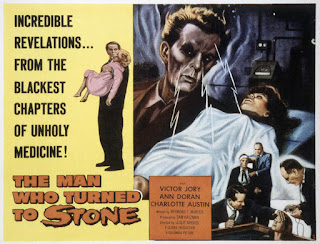 Following writing the screenplay for THE EARTH VS. THE FLYING SAUCERS, blacklisted writer Bernard Gordon penned two B-horrors for producer Sam Katzman, this film and ZOMBIESOF MORA-TAU.  I gave ZOMBIES a lambasting in my review, but it’s a masterpiece next to the other film, which is so slow-paced that it would have been more accurately titled THE MOVIE THAT TURNED TO STONE.

Most of the movie takes place on the grounds of a young woman’s detention center. STONE may be the only “girls’ prison” film in which none of the inmates discuss the crimes that put them in stir. The prison-girls exist only to be victims of their administrators, Doctor Murdock (Victor Jory), his female accomplice Mrs. Ford (Ann Doran), and four others. Though the exact chronology remains fuzzy, all of the administrators have been alive for over 200 years, because in the late 18th century they stumbled across a scientific method for leeching vital energy from victims, enabling the six of them to become immortal. They appear to be entirely normal unless they don’t get their allotment of energies, at which their bodies petrify before they perish.

For two centuries this coterie of mad scientists has preyed upon the bodies of young women, who for no stated reason are the only viable donors. By the 1950s, they’ve set up shop in the detention center, where they plan to keep themselves by occasionally draining young women and passing their deaths off to heart attacks.

But the best laid plans of mad scientists don’t make good movies unless they start to get bollixed up. One of the immortal men, Eric (tall, gaunt character actor Frederick Ledebur) can’t simply renew his energies every few decades like his compatriots, and he begins needing more treatments as his body becomes more stone-like. This means that more young prisoners must die and have their deaths covered up, which in turn causes another of the immortals, one Cooper, to become morally conflicted about the project. In addition, two social workers, one male and one female, start nosing into the suspicious deaths. While the actors playing these roles get a lot of lines, their characterizations are almost non-existent, excluding even the predictable romantic angle.

Only two scenes relieve the tedium. One is a Frankenstein-style scene in which Eric breaks into the girls’ dormitory to abduct a victim because he needs a transfer badly and his colleagues are taking too long. (This also may be the dullest dorm-raid ever committed to film, given that all the girls wear concealing robes and PJs.) The other scene involves actor Paul Cavanagh as the unfortunate Cooper, who gets denied his treatment when he shows reluctance, and the other immortals callously watch him die before their eyes. However, Cooper leaves behind evidence that alerts the protagonists to their true peril, and thus leaves the men who turn to stone between a rock and a hard place.

Posted by Gene Phillips at 1:18 PM
Email ThisBlogThis!Share to TwitterShare to FacebookShare to Pinterest
Labels: the marvelous