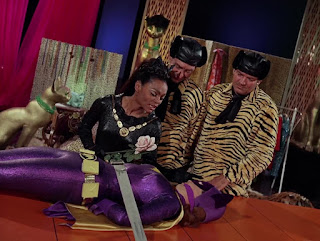 Though in earlier seasons Stanley Ralph Ross was given to a good deal of cornball humor, his script for “Catwoman’s Dressed to Kill” proves cleverer than the majority of third-season episodes. When we’re told that Batman plans to meet with the queen of Belgravia to discuss “the rise inf Belgravian misdemeanors,” we’re briefly back in the world of camp rather than pure zaniness.

Eartha Kitt’s Catwoman debut hinges on an outrageous spectacle of femininity. The Kitt-Catwoman first appears in the coda to “The Londinium Larcenies,” where the heroes witness the villainess invading police HQ in order to steal a bunch of “mini-uniforms” intended for Gotham’s policewomen. Not surprisingly this incident is utterly forgotten in the Catwoman episode proper, which begins with the feline felon interrupting a ladies’ luncheon dedicated to Gotham fashion. Since the luncheon is extolling Batgirl, Catwoman claims that the heroine’s charms run a “distant third” next to Catwoman’s, and she sabotages the luncheon with a “hair-raising bomb” that ruins all the ladies’ hairdos.

Despite appearances, Catwoman really nurses no particular animus toward Batgirl; the villain’s real target is the riches of the Belgravian embassy. She commits her fashion-crimes with the plan of capturing Batgirl and placing her in a death-trap. Once she’s done this, she telephones police HQ to let Batman and Robin know where they can rescue their comrade. The idea is to keep the crusaders from being at the Belgravian Embassy when Catwoman robs it. It never occurs to the villainess that the heroes could just send a bunch of Gordon’s cops to effect a rescue—and indeed, this stratagem also doesn’t occur to Batman and Robin either. But Batman, rather than personally coming to the salvation of an imperiled maiden, does entrust the task to a third party: that of Alfred. But the butler, to obscure his connection to the crusaders, dons his own “costume,” freeing Batgirl under the guise of “the world’s oldest hippie.” Thanks to this timely intervention, not only can Batman and Robin show up at the embassy to punch out Catwoman’s thugs, Batgirl also makes the scene as well. (Question: if the distance between Catwoman’s hideout and the embassy was supposed to keep the Dynamic Duo from protecting the Belgravian treasures, why didn’t it keep Batgirl from attending the final punch-up? Answer: none that would matter.)

o be sure, despite the “clever-zany” aspects of the episode, there’s a dumb-zany moment when Catwoman hides from the male crimefighters in a ladies’ change room. The heroes bumble about in pursuit with their hands over their eyes before one of the ladies bothers to tell them that no one in the eoom is even partly unclothed.

Posted by Gene Phillips at 3:09 PM
Email ThisBlogThis!Share to TwitterShare to FacebookShare to Pinterest
Labels: combative adventures, the marvelous