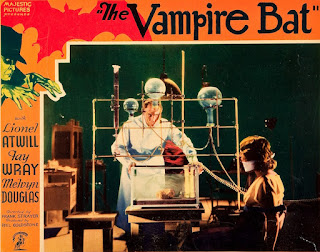 This film, shot quickly to take advantage of the horror craze of the early thirties, is an amiable timewaster, notable today for its re-use of actors with horror-reputations (Dwight Frye, Lionel Atwill and Fay Wray) as well as the use of not-yet-A-level Melvyn Douglas.

My guess is that the producers told the writers to come up with something that had the appeal of both DRACULA and FRANKENSTEIN. Both the movie’s title and the casting of Frye as a creepy bat-loving character seem to promise the audience a DRACULA type of experience. That said, the script seems more in sympathy with such vampire-debunking works as Browning’s lost LONDON AFTER MIDNIGHT. People in a German village are dying of exsanguination, and many burghers believe that real vampires, possessed of magical powers, have come to town. Policeman Karl (Douglas) mocks their superstitions at every turn, and since the movie presents Karl as smart and level-headed, the script more or less telegraphs its verdict on the question of the supernatural. Further, even though Frye’s bat-lover capers around scaring old ladies, he doesn’t actually do anything, and even in 1933 most viewers probably recognized him as a red herring. (It also helps that he dies roughly at the film’s halfway point.) Since the only other characters are Karl’s girlfriend (Wray) and the girlfriend’s physician mentor Von Niemann (Atwill), there aren’t exactly a wealth of suspects for the identity of the vampiric killer.

After the climactic reveal Von Niemann rants about his Frankensteinian aspirations, but viewers don’t see anything of the artificial life he wishes to bring about. One only sees his low-tech method of committing vampire murders, which aligns the film with the phenomenality of the uncanny.

The debate between Karl and the burghers over vampirism is the film’s only high point. Though the repute of the actors has ensured that this film is director Frank Strayer’s best known work, I quite preferred the pulpish intensity of THE MONSTER WALKS.

Posted by Gene Phillips at 12:59 PM
Email ThisBlogThis!Share to TwitterShare to FacebookShare to Pinterest
Labels: diabolical devices (u), phantasmal figurations (u), the uncanny