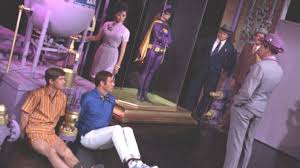 I’m reasonably sure that no one begged for a return of Louie the Lilac. Still, Charles Hoffman’s script for the character is marginally better than Dwight Taylor’s original outing. Once again, Milton Berle struts around in forties gangster garb, ordering his similarly garbed minions about their duties—but this time the villain’s big score makes a little more sense than suborning hippies. This time Louie hopes to gain control of Gotham’s perfume market, with particularly emphasis on perfumes made from lilacs. To this end the floral felon lays in a supply of the many animals (muskrats, musk deer) or animat substances (ambergris) used in perfume-making. (Given the show’s budget, Louie’s zoological acquisitions are never seen on camera.) Louie also has this thugs kidnap Bruce Wayne and Dick Grayson because the crook knows that Wayne has the expertise to extract the glands of perfume-bearing animals, and apparently Louie would rather get a millionaire dilettante, rather than an expert, to perform his operations. Dumb as this is, the episode generates a tiny bit of suspense from the fact that Bruce and Dick remain captives for most of the story.

Barbara Gordon, not aware of the Dilettante Duo’s secret identities, coordinates with Alfred in order to figure out the location of Louie’s hideout. However, in order to burn up screen time while Batman and Robin are nullified, Barbara gets delayed at her apartment by an officious maintenance man who comes close to discovering the heroine’s change-room. Thanks to Alfred’s help, Batgirl shows up at Louie’s hideout, where the villain captures her and dooms her to be scalded to death in boiling oil. Bruce and Dick escape, change into their work-clothes and briefly confer with Gordon’s cops, who make a rare appearance outside a villain’s hideout. (Possibly Hoffman was channeling old Jimmy Cagney movies.) Batman and Robin break into the hideout and engage their foes, while Batgirl gets herself free of her death-trap and joins in the low-energy “fun.” Louie repeats the phrase “lilac time” about four times in the episode, but I doubt this story ever inspired anyone to check out the provenance of the phrase in Walt Whitman’s poetry. (Batman also calls Louie’s gang a “lavender mob,” a reference to a British crime comedy film.)

Posted by Gene Phillips at 12:53 PM
Email ThisBlogThis!Share to TwitterShare to FacebookShare to Pinterest
Labels: combative adventures, the marvelous