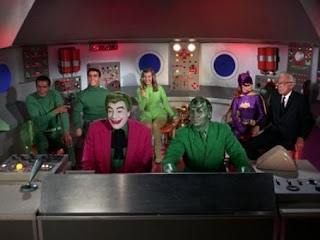 A flying saucer appears over Gotham City, and a not-so-little green man invades the library of Barbara Gordon, causing very minor disturbances. Both events have their source in the machinations of the Joker, whose green hair may have suggested to Charles Hoffman an association with green-fleshed aliens.

Once again Joker employs advanced technology, claiming that he got his saucer from a mad scientist cellmate. Batman and Robin confer with Gordon about the crisis, while the green man (former teen actor Richard Bakalyan) plants a bomb in the Batmobile. While the bomb ticks away, Joker explains to his minions how he plans to terrorize first Gotham, and then the world, into bowing down to his authority. Batman deduces Joker’s hand in this game and figures out that the fiend will need access to precious metals, the sort kept in one of Bruce Wayne’s many research facilities.

Both Batgirl and Alfred pursue separate courses to learn Joker’s plans, which proves necessary because the Batmobile-bomb finally goes off in the Batcave. Neither Batman nor Robin are killed in the explosion, but it does take them out of the action for a time, allowing Joker to take both Batgirl and Alfred prisoner. Joker threatens to shoot Batgirl into space on a solo rocket, but she foils this trap, after which he simply keeps her around as a hostage. A timely broadcast by Alfred brings the Duo to Joker’s hideout, with the usual concluding fight. Not even the flamboyance of Cesar Romero and a brief appearance by the Bat-copter can keep “Saucer” from being one of the dullest episodes.

Posted by Gene Phillips at 1:51 PM
Email ThisBlogThis!Share to TwitterShare to FacebookShare to Pinterest
Labels: combative adventures, the marvelous