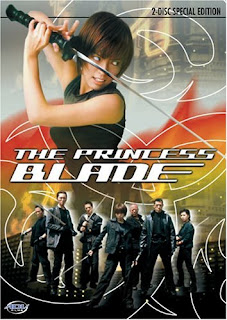 This swordplay film is billed as a re-imagining of the seventies manga LADy SNOWBLOOD and its cinematic adaptations. Regrettably, PRINCESS BLADE lacks the earlier works’ strong characterization and period flavor. Indeed, BLADE essentially takes place in modern times, though a vague SF-apocalypse is conjured up to account for the absence of firearms. (That said, if one can judge the original film by the English-dubbed version, the script doesn’t even come up with a future-history as elaborate as that of BUNRAKU.)

Heroine Yuki (Yumiko Shaku) resembles Lady Snowblood in sporting a name that means “snow” in Japanese. In addition, this Yuki is also out to avenge an injustice done to her parents, though here the parents have some aristocratic background. Some old retainers address Yuki as “princess,” though it’s never clear as to why the scion of a royal house is first seen running around assassinating enemies with her samurai sword. The script has so little interest in establishing Yuki’s backstory or the ambitions of her enemies that both concerns are largely ignored in favor of a romantic subplot. Early in the film Yuki is wounded by her foes, but in escaping finds her way to a Japanese farm and takes up residence for a time with a handsome farm-boy, who’s even less well characterized than Yuki.

Though the script pays some lip-service to the conflict between normal life and the existence of an action-hero, BLADE’s only strong elements are the swordfight-scenes, and these are far from top of the line. Yumiko Shaku delivered a powerful performance in GODZILLA AGAINSTMECHAGODZILLA—a perf strong enough that she almost outshone the Big Green Guy—but in BLADE she has nothing to work with.

Posted by Gene Phillips at 1:04 PM
Email ThisBlogThis!Share to TwitterShare to FacebookShare to Pinterest
Labels: combative adventures, the marvelous