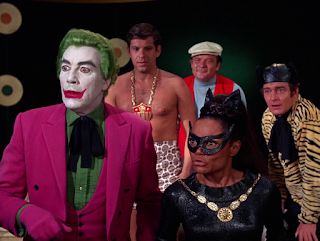 “Funny” opens with yet another instance of Warden Crichton’s “revolving-door” policy with regard to hardened felons, when the Clown Prince of Crime (Cesar Romero) is once more paroled. At least one previous episode showed Batman becoming slightly frustrated with Crichton’s methods, but here Stanley Ralph Ross decides to have Bruce Wayne sponsor the Joker’s early release. Wayne’s sponsorship serves no purpose in the overall plot, so Ross may have included him in the scene simply so that Batman would find out quickly what was going on—particularly when Joker is openly abducted—right in front of the prison—by Catwoman (Eartha Kitt) in her attention-getting Kitty-Car.

Naturally, Joker is complicit in this kidnapping, which is a second plot-element that comes to absolutely nothing. Joker and Catwoman later rendezvous in a sleazy hotel—whose actual name is Sleazy Hotel—because the room overlooks the commissioner’s office, where Batman and Robin are conferring with Gordon. In keeping with the way most Bat-villains broadcast their intentions, Catwoman sends Batman a message via her “catgun.” The message doesn’t amount to much, but when Batman and Robin suss out the room from which it was shot at them, they—and late arrival Batgirl—somehow dope out that Joker and Catwoman are working together.

Whereas Joker dominated his partnership with Penguin in “The Zodiac Crimes,” Catwoman’s in charge here—although it’s not a particularly impressive plot, in that she wants to get hold of an ancient cache of gunpowder in order to assault the Gotham Mint. Joker himself points out how dumb this “dumb-zany” scheme is, noting that it would be a lot easier just to blow the Gotham vault with dynamite. Catwoman’s response comes down to admitting that they just have to follow the asinine plot.

The episode takes a slight upswing when Batman and Robin next overtake the villains and their goons, though the only improvement is that the resultant fight takes place in a decent set, that of a flamboyant record producer. But then the story takes a huge dip in quality when the Duo fall for a ridiculous Joker-ploy, and the heroes have to rescued by Batgirl, who almost doesn’t arrive in time due to Gotham’s traffic laws. (“You wouldn’t have wanted me to speed, would you?”) The first segment of this two-parter concludes with another lame quasi-cliffhanger, as the villains prepare to ambush the three heroes.

The second segment doesn’t even deliver on this mild promise of excitement. Joker and Catwoman wait until Batman and Robin take their leave, and then ambush only Batgirl. The villains leave the heroine in what counts as the third season’s second least expensive death-trap: rawhide cords that will slowly strangle Batgirl to death. Lame though the trap is, at least Batgirl escapes it on her own resources.

Joker and Catwoman utilize their recent plunder to buy a treasure-map, and this leads them to the storage-place of the gunpowder cache, that of a lighthouse run by a husband and wife who are both eccentric and incredibly unfunny. The heroes show up for a second battle, but following the heroes’ triumph, Joker accidentally drops a match amid the gunpowder. Batman pulls an essentially magical device out of his belt and keeps the explosion from decimating the lighthouse-set and everyone in it, though it is stated (not shown) that the rest of the structure still gets destroyed.

In most Bat-tales this would be the end of the story. But Joker, Catwoman and their henchmen are tried as a group in the next day or so, and the felons engage the services of famed attorney Lucky Pierre. (This is one of the few sex-jokes in the series, given that this name carries various disparate connotations in erotica.) Batman worries enough about the trial’s outcome that he volunteers his services as prosecuting attorney. He makes his case, but the jury finds the fiends innocent. In no time at all, Batman, Robin and Batgirl discover that the jurors are all disguised criminals hired by Lucky Pierre. A goofy courtroom free-for-all transpires, and this mediocre episode marks the last outing for any version of Catwoman in BATMAN ’66.

Posted by Gene Phillips at 12:46 PM
Email ThisBlogThis!Share to TwitterShare to FacebookShare to Pinterest
Labels: combative adventures, the marvelous