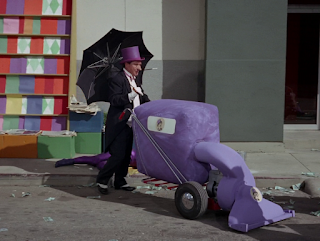 For Penguin’s final appearance on the show, Stanford Sherman gives the villain a more venturesome plot than his antics in “Enter Batgirl” and “Sport of Penguins.” Penguin (Meredith), his moll and his henchmen infiltrate the Gotham Mint, but the villains’ purpose is not to take anything away, but to leave behind the poisonous effluvia of the lethal Ligerian fruit fly, so as to contaminate the money being printed at the mint. Despite evidence that the mint’s employees have been stricken with sleeping sickness, it takes the heroes a while to work out the specifics of Penguin’s plans. However, when Penguin steals the only vaccine in Gotham that can cure the disease, the good guys make the connection. Because some of the contaminated money is issued to Gotham residents, every citizen is forced to toss his paper money into the street—and Penguin is just the bird prepared to collect this windfall, in the episode’s most memorable image. Batgirl is first on the scene, but Penguin subdues her, though he doesn’t bother to kill her.

However, Bruce Wayne puts a crimp in Penguin’s plan by informing every financier in the world that the Birdman Bandit’s money is tainted. Batman then fears that the frustrated fiend will unleash all of the flies upon Gotham, but he takes preventive measures. Thus, when Penguin emerged from hiding to gloat over a city stricken with sleeping citizens—including his nemesis—the Terrific Trio spring to life and batter the villains into submission in an above-average end-fight.

Posted by Gene Phillips at 1:04 PM
Email ThisBlogThis!Share to TwitterShare to FacebookShare to Pinterest
Labels: combative adventures, the marvelous