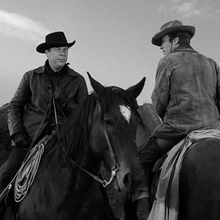 The programs RAWHIDE and WAGON TRAIN ran roughly concurrently. Both were westerns, and both concerned the business of transportation across the frontier. Both tended to deal with naturalistic story material, but occasionally devoted a few episodes to uncanny occurrences that happened either the regular characters or to guest-stars. Yet WAGON TRAIN, even in its uncanny moments, always projected a rational outlook. The wagon-master and his allies were in the business of conducting settlers to find new lives in the Old West. Thus, even if there were times when their progress was impeded by unusual events or even just melodramatic tragedy, WAGON TRAIN always emphasized the theme of progress. In contrast, RAWHIDE’s main characters, though also engaged in a hardnosed business, had but one task: to move herds of dumb, easily panicked beasts to waiting markets, where the beasts would be used, in one way or another, to provide food for humans. Rather than reinforcing the notion of progress, most episodes of RAWHIDE, uncanny or not, portray the lives of the drovers as peripatetic and repetitious, with figurative specters of death haunting their peregrinations.

Trail boss Gil Favor sends some men—including his ramrod Rowdy, the Mexican drover Hey Soos, and a non-regular named Calhoun—into a small town for supplies. Hey Soos, who often acts as the voice of superstition on the series, intuits the threat of death in the area. Rowdy scoffs and seeks out a Wells Fargo office. He spots a stranger mournfully singing the elegy “Streets of Laredo” but thinks nothing of it until the man, later identified as an outlaw named John Day, draws on Rowdy with the intent of robbing him. Calhoun walks in on the scene, Day shoots him and Rowdy shoots Day. Calhoun is only wounded, and as Day perishes, he pronounces an ambiguous curse on Rowdy.

Rowdy, Hey Soos and Calhoun—whose wound continues to plague him—return to the drive and acquaint Favor with the occurrences. To Rowdy’s disquiet he learns that in his absence Favor has hired a drover named Rivers, who looks exactly like the late Day. Favor believes the resemblance is a coincidence, Hey Soos believes Rivers is an agent of death, and Rowdy doesn’t know what to believe—particularly when Rivers has the habit of singing “Streets of Laredo” and making enigmatic remarks about death.

Favor wonders if the lookalike might be a twin brother, and somehow he comes across an old man in the area who knew the Day family, and who attests that although John Day had a twin, he’s supposed to have died long ago. But this news exacerbates Rowdy’s fears. The strange fellow even agrees when Rowdy wonders if the name “Rivers” suggests some barrier that he Rowdy has to cross. Further, Calhoun dies, apparently of his festering wound, and Hey Soos injures himself in trying to avoid contact with the double.

Rowdy finally confronts Rivers, and the non-supernatural truth is revealed: he’s Jim Day, and his apparent death was faked to save him from a false legal charge. To sell the illusion of death, Day even allowed himself to be buried alive, after which he lived a life apart from men, becoming a pariah. To avenge his brother, he pretended to be a ghost in the hope of provoking Rowdy into killing him—which would have led to Rowdy’s hanging, since Day could not physically draw a gun. Favor allows Day to leave the camp, since he can no longer harm anyone, and he’s condemned to a living death by his own hate.

While the explanation of the “haunting” might seem rational, Day’s ability to generate fear with his illusions qualifies as an uncanny version of the phantasmal figuration trope, since the fear of death is in no way lessened by the revelation. Favor pronounces the closest thing the episode has to a “moral,” emphasizing the importance of showing courage in the face of fear. But the fear is no less for all that, and the title’s use of the Christian term “pale rider”—which does not otherwise appear in the episode-- suggests an archetypal dimension to such apprehensions. Day’s illusion is more subtle than most similar types, since it’s accomplished through suggestion, not unlike a more pervasive hoax perpetrated in the 1944 film WEIRD WOMAN.

Though RAWHIDE boasts a few combative episodes, “Pale Rider” conforms to the overall subcombative tendencies of the series.

Posted by Gene Phillips at 2:31 PM
Email ThisBlogThis!Share to TwitterShare to FacebookShare to Pinterest
Labels: phantasmal figurations (u), the uncanny