OMAMORI HIMARI, DANCE IN THE VAMPIRE BUND (both 2010) 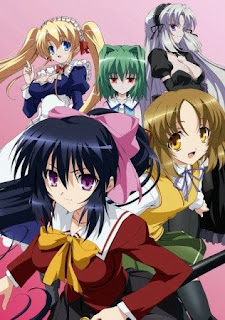 I’ve no acquaintance with specific changes in the business of making anime serials for Japanese TV. However, it seems that during the 21st century it’s become common for production companies to adapt manga serials, often serials that ran for several years, with a very conservative production of twelve to fifteen episodes for a single season. Without reading the original serial, one can’t be sure that the brevity of the adaptation necessarily resulted in a rocky translation. I suspected that this might be the case with the adaptation of DATE A LIVE, but for all I know the original manga might not have been much more coherent than the anime. One anime serial, CORPSE PRINCESS, ended its only season without a clear resolution, suggesting that the creators were hoping for a second season that didn’t materialize. Yet it must be admitted that for many years a lot of television shows, animated or otherwise, have been prematurely terminated before reaching a stopping-point, so perhaps this is simply an innate problem with the television medium.

I’ve not read the manga-series OMAMORI HIMARI, though since it lasted about four years it’s certainly likely that the twelve-episode TV show left out a lot of stuff. The show looks in most respects like a cookie-cutter “magical girl” show. Yuuto, a completely average high-school boy, lives an ordinary life, with parents who are either deceased or never seen, and a pretty neighbor-girl who acts like a girlfriend even though she’s not defined as such. Then Himari Noihara, a busty teen girl with cat-ears, bursts into Yuuto’s life. She reveals that he’s the descendant of a line of demon slayers, and that Himari is one of those demons. However, because one of Yuuto’s ancestors spared Himari’s life, she swore fealty to defend the last remaining scion of the line from other demons. In Himari’s first interaction with Yuuto and Rinku, she gives a graphic display of demon-slaying when an insect-creature briefly possesses one of Yuuto’s classmates.

In addition to Himari moving into Yuuto’s house and constantly threatening his virginity, OMAMORI quickly becomes a cookie-cutter harem comedy as well. Yuuto, despite being a nebbishy non-entity, attracts numerous cute girls into his sphere: a cute water-demon, a cute “tea demon” (who plies her trade in a Japanese “maid café”), and a cute demon slayer from another demon-slayer family. It’s possible that in the original manga these secondary love-interests may form an ensemble where they’re as important to the series as the primary couple. However, because the show only has twelve episodes to work with, I would rate all of the other girls as supporting characters.

I’m not even sure Yuuto qualifies as a central character. Despite descending from demon fighters, Yuuto doesn’t become versed in the ways of battling boogiemen. Himari states that Yuuto possesses an inherent talent to bring forth a mystical phenomenon called “the Passing of the Light.” He finally manifests this talent in the final episode, but his power consists of being able to “power up” Himari so that she can slay the main demon-villain, one Shuten Doji (an authentic Japanese boogie, for what that’s worth). Though manga and anime are replete with dozens of everyman protagonists, Yuuto is one of the dullest out there, so that I tend to view Himari as the show’s only central character.

The TV show has one ingenious idea. Though at first the show seems concerned only with rooting out malicious goblins, the true threat is that the demons are also in danger. Shuten Doji can only restore himself to full power by consuming demons with the use of a voracious minion, so the demon-girls in Yuuto’s harem have a vested interest in making common cause with Yuuto and Himari. Both the supernatural action-scenes and the humorous erotica are average, so another season probably wouldn’t have revealed any profound depths. 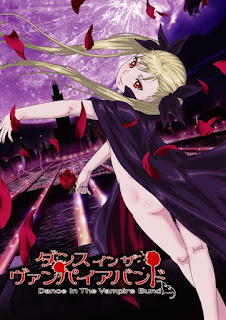 DANCE IN THE VAMPIRE BUND, also a one-season wonder with just twelve episodes, had a much greater capacity for spectacular failure. The manga-series DANCE has ranged over several years and several volumes and still has not reached a stopping-point. Nozomi Tamaki’s manga is as layered as any of the best prose adventure-novels, with two strong leads and a wealth of impressive supporting characters. DANCE takes place in a world where vampires and werewolves have existed since antiquity, but only in modern times has Mina Tepes, the Queen of the Vampires, established a self-sufficient kingdom for the vampire people. But Mina has countless enemies, and her strongest ally in preserving the Vampire Bund is her werewolf bodyguard Akira. The two of them, who possess both a nascent romantic bond and a figurative “daimyo-samurai” relationship, embody the heart and the soul of this extraordinary serial, to which I’ve devoted two essays, here and here.

Happily, the DANCE teleseries does not make the error of attempting to condense this sprawling saga into a single season, as did (for instance) the second season of ROSARIO + VAMPIRE. Although DANCE elides a lot of plotlines and supporting characters, and changes one support-character from male to female, the twelve episodes faithfully adapt the essence of the first two or three major arcs. The show references Mina’s three main enemies from the early continuity and concludes by causing the trio to be stymied though not precisely defeated. In addition, the final episode alludes to yet another major evildoer, but anyone who wants to learn more about that character would be forced to seek out the manga-stories.

It’s almost standard for anime serials to faithfully emulate the artistic look of the manga-art, and DANCE effectively mirrors Tamaki’s lush designs of characters, locales and attire. Tamaki’s series was more vulnerable to being censored in one respect: that the character of Mina, seeking to protect herself from being forcefully married to some vampire-lord, has transformed herself into a pre-teen girl. For this reason, the potential romance between Mina and Akira remains merely a wish-dream, even though one episode makes it clear that under the right circumstances Mina can transform into a mature form, albeit temporarily. I’ve argued that Tamaki was not playing to the “lolicon” undercurrents in Japanese manga and anime but that he was in fact deconstructing that cultural meme by showing that Mina’s immature body was not on display for the purpose of erotic stimulation, and might in theory even discourage anyone so inclined. Even in Japan, though, this meme could have been censored for television consumption. DANCE not only keeps the meme but is true to Tamaki’s handling of it. Since this accuracy might not have lasted over the long haul, the brevity of this particular anime series might be a blessing in disguise.

Posted by Gene Phillips at 4:41 PM
Email ThisBlogThis!Share to TwitterShare to FacebookShare to Pinterest
Labels: combative adventures, the marvelous