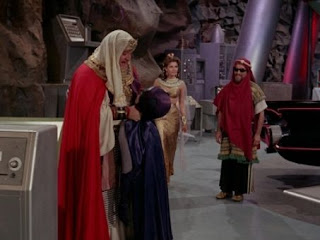 King Tut, back for his last outing, conveniently forgets that he had ferreted out the true identities of Batman and Robin, even if no one believed him. This time he’s seeking Nilanium, a super-metal which once existed in ancient Egypt, and which can be used to build “an indestructible empire.” There’s also a Nilanium deposit far beneath stately Wayne Manor, and since that land is not for sale, Tut buys the land next to Wayne Manor, planning to illegally drill his way onto Wayne’s land.

Though Batman pretty much deduces Tut’s plan, Barbara Gordon happens to be on hand when Tut makes contact with a land agent to buy the land. This development comes about simply to give Batgirl a pipeline to the situation, even though she doesn’t know that Tut’s real threat is not that of purloining Nilanium, but of tunneling his way into the Batcave.

Stanley Ralph Ross has the Duo take their sweet time about countering Tut’s foray, and thus Tut invades the Batcave with barely any opposition. The heroes erase the memories of Tut’s henchpeople with the usual Bat-gas, but Tut escapes, and almost manages to reveal the Big Secret to Batgirl and other onlookers. That hoary old device, a falling chunk of rock, robs the Felonious Pharaoh of his memory. The only noteworthy joke in this weak sauce is that when the amnesiac professor is collared by cops, he calls them “Harvard people.”

Posted by Gene Phillips at 1:48 PM
Email ThisBlogThis!Share to TwitterShare to FacebookShare to Pinterest
Labels: combative adventures, the marvelous