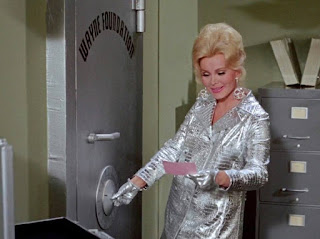 The final episode of BATMAN ’66 ends the series on a “clever-zany’ note. Villainous Minerva (Zsa Zsa Gabor) runs a spa for celebrities. Writer Charles Hoffman may have derived her name from the general association of the Roman goddess Minerva with health in general, and thus with concepts like Roman baths. To Minerva’s spa go such many wealthy men—two of whom are played by showrunners William Dozier and Howie Horowitz—and she then uses a machine called the “Deepest Secret Extractor” to, uh, suck the secrets out of the men’s minds regarding the places where they hide their valuables. This big score depends entirely on the millionaires hiding their goodies in all sorts of easily accessible locations, though at least, when Minerva uses her device on Bruce Wayne, she has to harvest a combination number to Wayne’s safe to steal a trove of diamonds. Wayne doesn’t remember having this particular secret sucked out of him—which one would not think to be his “deepest secret”—but he becomes suspicious of Minerva’s operation.

Bruce and Dick change to Batman and Robin, and they show up, requesting Minerva’s massage treatment, though they don’t even doff their costumes for the process. Minerva’s feminine intuition tells her to get rid of these quasi-cops by having her henchmen shove them into a deadly pressurizing machine. Naturally, the heroes escape while the henchmen are looking the other way, and when they charge Minerva with the crime, she claims that it was all just an innocent mistake. Batman, having overheard that Minerva’s planning a rendezvous with another millionaire, attempts to set up the sinister spa-owner so that they can catch her in the act. Once again, Alfred, sans any makeup, is sent into a villain’s hideout in order to impersonate a famous figure. Minerva is initially fooled by the imposture, but her Extractor reveals that Alfred is a phony. In addition, the machine comes close to revealing the butler’s knowledge of three secret identities, but Batgirl makes the scene and interferes. Minerva has her thugs pop Batgirl and Alfred into the pressurizer, but by that time Batman and Robin move in, and the heroes wipe up the gym with the henchmen, after which Minerva is taken prisoner. Minerva, while only a modest supercrook, is certainly an improvement over Doctor Cassandra, and Gabor, never known for superlative acting skills, imparts an appealing combination of charm and deviousness to the character. The episode ends with Batgirl disappearing once again, and Batman ends the series with the quizzical query about her: ‘Who knows, Robin? Who ever knows?”

Posted by Gene Phillips at 2:09 PM
Email ThisBlogThis!Share to TwitterShare to FacebookShare to Pinterest
Labels: combative adventures, the marvelous