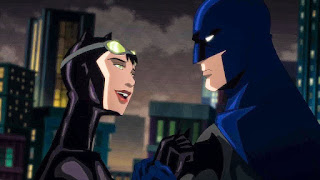 Like most animated video adaptations of comic-book narratives, HUSH departs substantially from the original work, eliminating many of the plot-threads and cutting back on the number of villainous guest-stars. By itself, this is no great forfeit. In the original HUSH, a great deal of the book’s appeal inhered in seeing Big-Name Artist Jim Lee do his rendition of Batman and his many allies and enemies. This isn’t a pleasure one can derive from studio animation films, except when they sedulously imitate the stylings of a master like Tezuka or Moebius.

I don’t imagine that anyone watching the film will care, for instance, that the film’s script cuts out one villain, Killer Croc, and sticks Bane in his place. At times I was a little surprised that the script kept some of the plots that only nominally contributed to the overall plot, such as guest-starring appearances for Superman, Lois Lane, and Lex Luthor. For the most part the flick adequately adapted those sections of the original tale that it kept.

HUSH’s greatest deviation is that it writes out the character of the very Bat-villain after whom it’s named, for the script cuts down the narrative complications by revealing that Hush is just an old foe in a new outfit. I suppose the filmmakers’ rationale was that they had no particular reason to keep a new Bat-foe around. Animation studios don’t put out as much material as publishers of monthly comic books, so the former don't need as many new stories for DTV flicks. But it's sort of like doing an update of CITIZEN KANE in which one decides that the real focus of the story ought to be the investigative journalist.

As far as keeping to Loeb and Lee’s theme—that Batman is traumatically alienated from even his closest friends and romantic partners (Catwoman, naturally)—the filmmakers choose not to go down that path. The script for HUSH thus chooses a simpler and less challenging trope: Batman, because he lost people close to him, is fixated on saving even the worst criminals he encounters from death. This code of behavior leads to a final schism between Batman and Catwoman, though not for the reasons cited by Loeb's narrative. In fact, while HUSH the comic is mostly about Batman, with Catwoman having the status of a "guest star," Batman and Catwoman are together so much throughout the video that they're as much partners in this story as Batman and Robin are in most of their adventures.

The fight-scenes are well handled, the standout being an athletic bout between Catwoman and Harley Quinn. But only once did the script excel in terms of humor. The original HUSH saga predated the introduction of Batman’s son Damian, but by the time the story was adapted to a DTV format, Damian had already appeared in other Batman animations. Here he contributes a minor moment of humor by excoriating the main hero for his questionable taste in women, including Damian’s own mother. But that's the only memorable moment of humor in the flick.

Posted by Gene Phillips at 1:42 PM
Email ThisBlogThis!Share to TwitterShare to FacebookShare to Pinterest
Labels: combative adventures, the marvelous