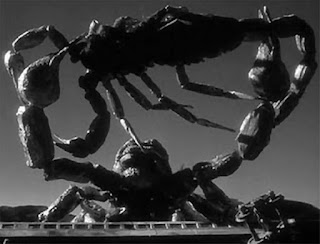 THE BLACK SCORPION, while not one of the great classics of 1950s science fiction, is certainly one of the era’s better “giant creature” films. Such films continued to appear throughout the sixties, but many of them—KONGA, GORGO—seem to follow the model of the Japanese Godzilla franchise, rather than focusing on the purely animalistic threats seen in THEM and TARANTULA.

SCORPION’s direction by Edward Ludwig is as crisp and efficient as any of the works of Jack Arnold and Gordon Douglas, and the movie is well served by the familiar faces of Richard Denning and Mara Corday, even though the predominantly Mexican cast mitigates against the game of “find the familiar actor.” The film’s primary weakness is the formulaic script. Though both of the scripters, Robert Blees and David Duncan, produced some better-than-average original stories, it’s clear that neither of them was capable of equaling the cosmological and sociological myths found in the Sherdeman-Hughes THEM. Blees and Duncan may have taken a page from the first GODZILLA film, since SCORPION’s oversized beasties also emerge from Earth’s subterranean core. But the ways in which the scripters have Denning’s geologist character gradually discover the presence of giant monsters in Mexico are predictable, and the main viewpoint-characters played by Denning and Corday are both one-dimensional. And whereas THEM has Edmund Gwenn to inform the audience about all the fascinating aspects of ants, there’s no advocate for arachnids in SCORPION.

All that said, to fans of fifties SF, SCORPION is most notable for the stop-motion effects of Willis O’Brien, which were also presumably the main selling-point for fifties audiences. O’Brien, of course, is justly lauded as one of the co-creators of the classic 1933 KING KONG, and most of his subsequent work seems like a footnote to KONG. SCORPION is no exception here, but IMO it provides a much more interesting footnote than either THE SON OF KONG or MIGHTY JOE YOUNG.

Consider: one aspect of ’33 KONG that barely appears in the later giant-ape films is the sense of “nature red in tooth and claw.” King Kong, apparently the last of his species, reigns over an island full of beasts constantly preying upon one another, and Kong is no less savage than any of them, even if his heart is softened by the emotion of love. Such visions of brutality are played down in O’Brien’s other ape flicks, and even the ’33 KONG cut an O’Brien scene deemed too violent for contemporaneous audiences, in which sailors were slaughtered by a congeries of giant spiders and insects.

Did either O’Brien or someone else conceive of SCORPION as a recapitulation of that long-vanished scene of insectoid mayhem? This theory is supported by the scene in which Denning’s character descends to the underworld to learn the nature of the giant scorpions, and he sees a handful of other big insects. The other big beasts are only there to provide a skein of logic for the long-term survival of the prehistoric scorpions in their subterranean Skull Island. For that matter, though there are some effective scenes in which several big scorpions attack the surface world, the star of the show is the biggest, meanest, and blackest member of the brood. The Black Scorpion asserts his sovereignty late in the film, when for no explicit reason all the scorpions go mad and attack one another, until the Big Black One is the only survivor. This simplifies the mission of the humans, who now have only one Achilles Heel to attack instead of several.

Though the Black Scorpion is too far from humanity to inspire any of the sympathetic aspects of the original Kong, he does at least emulate Kong’s sheer ferocity. The climactic scene, in which the big bug fights off tanks and helicopters with his invincible stinger, might be seen as the capper to O’Brien’s career, given that nothing he did in later productions—THE GIANT BEHEMOTH, THE LOST WORLD—equals the sublime wonder of this scene. If everything else in the film had been this good, SCORPION could have surpassed THEM.

On a minor note, though some viewers find themselves uncomfortable with racial images in KING KONG, the script for SCORPION is blameless in this regard. Some fifties films might be fairly accused of ethnocentrism, but all the Mexican characters in SCORPION are simply pictured as normal people reacting to a fantastic situation. Even the cute Mexican kid is nothing but a kid who happens to live in Mexico, and since he barely interacts with Denning’s character, SCORPION easily wards off any accusations of cultural paternalism.

Posted by Gene Phillips at 11:45 AM
Email ThisBlogThis!Share to TwitterShare to FacebookShare to Pinterest
Labels: combative dramas, the marvelous