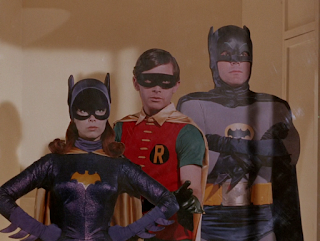 Bad as Louie the Lilac was, at least the role didn’t require sixty-something Milton Berle to dress up in mod hippie garb. Such is the unfortunate fate of Ida Lupino and Howard Duff for having agreed to play the sinister swingers Doctor Cassandra and her henchman Cabal. According to Stanley Ralph Ross’s script, Cassandra is a master of the “occult sciences” and of alchemy. In contrast her compatriot, despite having a “cabalistic” name, seems to be a jive-talking dullard. Cassandra comes from a long line of old-time witches and alchemists who were scorned as failures, and now she seeks to control all of Gotham City. One of her devices is an invisibility pill, which sounds positively sane next to her other “dumb-zany” contrivance. The latter is her “Alvino Ray Gun,” which seems to borrow its principles from animated cartoons, since the gun has the power to turn flesh and blood humans into flat cardboard cutouts. (As with the episode “A Piece of the Action,” writers of the show liked the idea of turning the actors into two-dimensional figures like those seen in comics.)

Cassandra and Cabal obligingly drop the flattened fighters off at police HQ, the better to show off their power. This proves a big mistake, since the cops transfer the figurines into the custody of Alfred, and he again uses a Bat-miracle device to restore all three crusaders to normal.

Meanwhile, Cassandra enacts her plan to make all of Gotham’s supercrooks into her allies, by releasing them from the prison. All of the arch-fiends are played by doubles, though some of the sound-effects, like the laughs of Romero and Gorshin, are recycled to sell the illusion. The three heroes track down Cassandra’s hideout, but the evil alchemist has given all the crooks her invisibility pills. For a few moments the crimefighters are on the ropes against an invisible horde, but after Batman puts out the lights, the odds are evened and the good guys win out.

Lupino and Duff are pretty bad in their roles, though the actors have little to work with in these dumb-zany roles. This might qualify as the worst episode, except that Ross does throw in a few clever lines. In one scene, when Robin seems to fancy Batgirl, Batman remarks that Robin may be experiencing “the first oncoming thrust of manhood.” Similarly, when the three heroes are being zapped by the ray-gun, Batgirl claims that she feels herself being “flattened,” Batman makes the not-quite non-sequitur remark, “What a pity.”

Posted by Gene Phillips at 1:59 PM
Email ThisBlogThis!Share to TwitterShare to FacebookShare to Pinterest
Labels: combative adventures, the marvelous