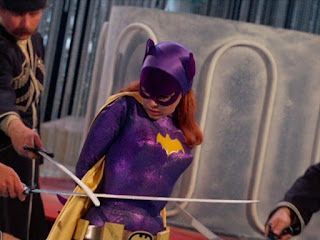 Egghead and Olga make their third and final appearance, and for the first time Stanford Sherman attempts to come up with a plot that melds Olga’s Cossack criminality and Egghead’s egg-obsession. It just so happens that the Gotham Museum is hosting a pair of conjoined Cossack artifacts. One is “the Silver Scimitar of Taras Bulbul” (a pun on the novel “Taras Bulba” and the Eastern word “bulbul,” meaning “nightingale”), while the other is a gigantic sculpture, “the Egg of Ogg,” in which the scimitar is impaled like Excalibur set in a boulder. Once Olga has the sword, she plans to use it as a rallying-point to help her regain the throne of Bessarovia, which in theory ought to lead to her and her Cossacks splitting from Gotham. However, Egghead can only prove himself worthy of marriage if he brings a substantial dowry to the table. So Egghead and Olga plot to steal a load of precious caviar (i.e., “fish eggs”), and thus incur the wrath of the Terrific Trio.

This is a Batgirl-centric episode, for she tracks the Ogg Couple to their hideout while Batman and Robin spend most of the episode floundering about. Yvonne Craig gets to show off her dancing-skills when Olga orders her Cossacks to treat Batgirl to a sword-dance, in which the heroine gets to dance out of the way as the goons try to stab her tootsies. Further, though BATMAN ’66 was not exactly a haven of feminist thought, the episode includes a exchange between Batman and Batgirl, in which the hero opines that crimefighting isn’t woman’s work, to which the heroine replies, “But I’m no ordinary woman.”

Posted by Gene Phillips at 12:41 PM
Email ThisBlogThis!Share to TwitterShare to FacebookShare to Pinterest
Labels: combative adventures, the marvelous