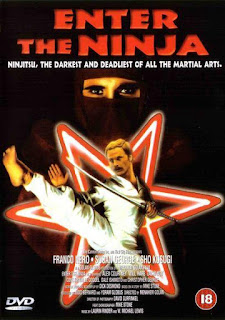 Ninjas had been kicking around in both Eastern and Western entertainment-venues for roughly twenty years before this film, and Chuck Norris’s THE OCTAGON, appearing in theaters the year before ENTER THE NINJA, may have kicked off the eighties craze for black-suited assassins on both sides of the good/evil spectrum. Yet ENTER, despite some sizeable shortcomings, proves a more entertaining film than the majority of ninja-flicks of that decade.

I’m not making any great claims of profundity for ENTER. It’s one of dozens of unassuming B-films to have issued from the production studios of Golan and Globus, sometimes (but not always) under the imprint of Cannon Films. ENTER has the distinction of being one of the few films in the directorial oeuvre of Menachem Golan (forty-plus flicks in all) that anyone remembers, aside from the 1986 Chuck Norris vehicle THE DELTA FORCE. Like THE OCTAGON, ENTER offers the spectacle of a Caucasian protagonist becoming initiated into the mysterious Eastern discipline of ninjutsu. Protagonist Cole (Franco Nero) graduates from some secret ninja school over the protests of a fellow student named Hasegawa (Sho Kosugi), who maintains that true ninjas can only be Japanese. But apparently Cole completes his course without being required to become an assassin in the service of anyone, Japanese or otherwise, and he then departs to visit Landers, an old war-buddy at Landers’ home in the Philippines.

The bulk of the film emulates one of the most popular tropes of western films: the mysterious stranger who rescues an embattled family, whose property is desired by one or more grasping money-men. When Cole arrives at Landers’ home, Landers’ wife Mary Anne holds a rifle on him, and he disarms her, all of which goes to proving how much the two owners of the property are under siege by an evil millionaire, Venarius (Christopher George). Venarius keeps throwing nasty henchmen at Landers and his wife, and Cole devastates all comers, until the rich guy finally gets an emissary to find him another ninja. One guess who.

Though there’s nothing original about the plot, Golan and scriptwriter Dick Desmond toss in a lot of mildly amusing business in between fight-scenes, particularly in the depiction of Venarius’ comical henchmen. In contrast, most ninja-flicks are pretty short on amusing bits, and thus ENTER’s biggest flaw is not the dull parts between the fights, but the star of the show. For some reason, Franco Nero, despite having essayed the role of Django, one of the most memorable spaghetti-western heroes, walks through his role, looking perpetually annoyed rather than seeming to be a tower of strength. Even when his buddy’s wife begins an affair with him—something Shane certainly would never have done—Cole always looks sour and maybe a little dyspeptic.

There aren’t a lot of exotic ninja weapons here, so the uncanny phenomenality inheres wholly in the costumes worn by both Cole and his opponent. Strangely, though Sho Kosugi’s performance isn’t much better than Nero’s, Kosugi was promoted to hero-status in the next two “ninja-hero” films from Golan and Globus, one of the few times an Asian got to portray such a protagonist in an American film.

Posted by Gene Phillips at 2:53 PM
Email ThisBlogThis!Share to TwitterShare to FacebookShare to Pinterest
Labels: combative adventures, outre outfits (u), the uncanny