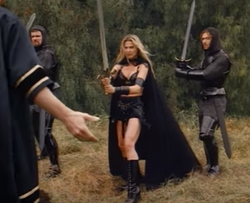 I've screened other "King Arthur" films that I liked less than this one, but this is still a pretty blah DTV flick. To be sure, one has to judge QUEST by what audience it was seeking to reach-- and to judge by the script, the writers knew that they were aiming at fairly undemanding middle schoolers.

The quick breakdown: back in vague Arthurian times, Pendragon's (never seen) military forces have just been defeated by an equally vague force, "the Dark Knights." Pendragon, seeking to protect his six-year-old son Arthur, summons his two magicians, Merlin (Arye Gross) and Morgana (Catherine Oxenberg). Merlin intends to project Little Arthur through a time-portal into the 20th century, instead of just sending the kid to be raised by some bucolic couple. Maybe Merlin visited the 20th century earlier and got really taken with reading Mark Twain's A CONNECTICUT YANKEE? Anyway, Morgana, Merlin's lover, is also the power behind the Dark Knights, a whole two of whom show up to foil Merlin's schemes. Nevertheless, despite being caught with his pants down, Merlin still manages to send himself, Little Arthur and the sword Excalibur back through time, though Pendragon gets himself killed.

Merlin stays near Little Arthur only long enough to see him adopted by a worthy young woman, and then he takes off to hide both himself and Excalibur. For no good reason he keeps hidden while Arthur grows to be an average American teen-- which naturally makes it very tough later on to convince young "Arthur Regal" (ugh) that he's really the heir to the throne in sixth-century England.

The writers knew their audience would want lots of silly humor, and so even the characters from the sixth century talk like modern-day TV comics. Just as Merlin reaches out to Teen Arthur, Morgana shows up in the 20th century as well, having considerately waited ten years in order to let Teen Arthur grow to the proper age. This MAY have had something to do with Arthur's fitness to inherit Excalibur, but I can't be sure the script ever makes that much sense. Morgana doesn't even do the logical thing-- immediately abduct Arthur's adoptive mom to ransom the magic sword-- but instead she mucks about pretending to be the principal of Artie's school. Eventually, after a lot of juvenile messing around, there's a desultory sword-fight between Teen Arthur and Morgana (who as shown above dresses like a Comicon booth-babe). After Morgan's defeat, Arthur decides to return to ancient England with Merlin, his mom and his girlfriend.

If I had to say something nice about this farrago, there's just one good line. Late in the film Merlin asks Morgana why she doesn't just stay in the 20th since she's adjusted to that world with ridiculous ease. She claims that there's just too much evil in the modern world, so that her villainy just wouldn't stand out as it does back in the sixth century. And that's the best I can do with this querulous quest.

Posted by Gene Phillips at 3:06 PM
Email ThisBlogThis!Share to TwitterShare to FacebookShare to Pinterest
Labels: combative comedies, the marvelous