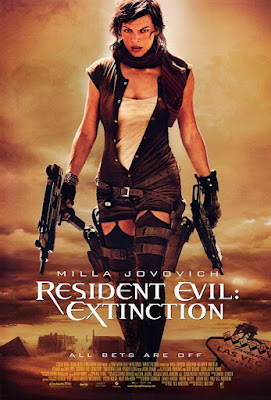 Once again Paul W.S. Anderson handles only writing chores on an EVIL sequel, with Russell Mulcahy in the director’s chair. Since Raccoon City is annihilated at the end of the first sequel, Anderson decided to up the ante by having the virus go global. The T-virus, like Alice and her friends, successfully escapes the city, and within five years, the world undergoes a full-on apocalypse—which makes one wonder if the two sequels ought to have exchanged subtitles. In addition to the usual winnowing of humanity into isolated enclaves of survivors, the virus has also mutated other forms of life enough to change the geosphere, though Anderson’s script doesn’t spend any time explaining the fine points of this transformation.

Further, the opening sequence reveals that Umbrella has a new bolt in their technological quiver: that of cloning. Alice appears to die in the setup scenes, only to disclose that this martial female is one of many Alice-clones being put through their paces by the new bad guy, Professor Isaacs. The clones, despite developing telekinetic abilities, just don’t seem to share the mojo of the original heroine, which makes it imperative for the mad scientist to find Alice.

Alice—who also now sports telekinesis among her other bio-engineered attributes, is seen wandering the desert on her own, with no explanation of how she parted company with the surviving escapees from APOCALYPSE. Jill Valentine will show up in a later entry, but after assorted adventures the wandering warrior happens across a convoy of trucks seeking a haven from the viral effects. This convoy just happens to include two of the survivors from the first sequel, Olivera and L.J., while also introducing to the film-franchise another game character, Claire Redfield (Ali Larter). Alice’s new talent comes in handy to dispel an attack by mutated crows—one of the few animals seen having been victimized by the outbreak—and thereafter the heroine seeks to help the survivors find a safe haven.

Isaacs sends zombies to attack the caravan in order to capture Alice, but though most of the innocents die, Alice and a few others escape and mount an attack on the villain’s facility. Isaacs escapes after being bitten by a zombie, and by the time Alice arrives at his facility the mad scientist has become a mutated monster. The heroine naturally triumphs and then gains control of Umbrella’s stock of still viable Alice-clones, promising to use them against Umbrella’s higher-ups.

EXTINCTION is not nearly as strong as APOCALYPSE in terms of its action-sequences, and the decimation of the world here is little more than an excuse to provide the fighters with a new environment. This entry is an okay timekiller, nothing more.

Posted by Gene Phillips at 3:31 PM
Email ThisBlogThis!Share to TwitterShare to FacebookShare to Pinterest
Labels: combative adventures, the marvelous