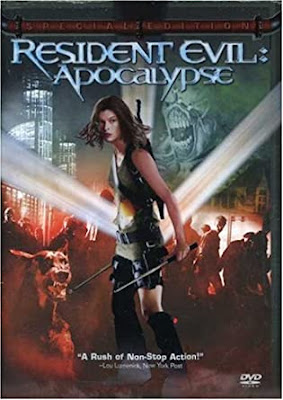 The first sequel to RESIDENT EVIL is directed by Alexander Witt and scripted by the first film’s writer-director Paul W.S Anderson. Whereas the original film focused on action within a relatively cramped space, APOCALYPSE displays the franchise’s propensity for big splashy action-scenes. This is because in between the first and second entries, the evil Umbrella Corporation decided to experiment on their former employee Alice (Milla Jovovich) with their T-virus. While the virus usually wreaks unpleasant mutations on its subjects, not to mention turning human corpses into hungry hungry zombies, Alice alone enjoys a beneficial mutation, even if she feels alienated at having been turned into a genetic freak.

APOCALYPSE is also much clearer about the genesis of the T-virus. Whereas the Umbrella Corporation was known to most citizens for benign pharmaceuticals while secretly working to produce bio-weapons, the creator of the destructive virus, a scientist named Ashford, originated the virus for a benevolent purpose: to provide disadvantaged people, like his crippled daughter, with a way to regenerate certain organs. This revelation makes it slightly more believable that Alice’s physicality is enhanced by the virus, since the virus does have a similar effect on Ashford’s daughter, though apparently on no one else. (The character of the daughter appears in the story but none of the Umbrella evildoers seem particularly interested in studying her, in comparison to their leaping through multiple hoops to test Alice.

In the first flick Alice only had one significant helper, activist Matt Addison, but here she gathers a more significant cast of support-characters. One is a news reporter anxious to get the straight dope on the viral outbreak, while three others are based on figures in the video game: Olivera, a rogue Umbrella operative, cop Jill Valentine, and an Umbrella supersoldier, Nemesis. To be sure, character interactions are not very important in this series, beyond providing a sense of common ground as Alice’s allies come together to resist Umbrella’s ruthless actions. The depravity that is only adequately depicted in the first film gets much stronger treatment here, particularly in an opening sequence in which the corporation’s goons forcibly confine the inhabitants of Raccoon City to their infected city. Later they arrange to launch a nuclear strike to wipe out the city and thus cover up the evidence of their transgressions. Alice’s mission becomes dual: to get her allies out of the city before they’ve either overwhelmed by zombies or slain by a nuclear blast, and then to expose Umbrella’s perfidy. At the same time, one of Umbrella’s head men, name of Cain, hopes to use their chaos as a means to take Alice’s measure, the better to research her new abilities.

The simple plot makes it easy for Anderson and Witt to focus on the big battle-scenes—one involving Alice running down the vertical side of a building to take a coterie of guards by surprise, another being a death-match with Nemesis, who turns out to be the vanished character Addison, mutated by Umbrella. Cain arranges the match with almost Nietschean glee in the exercise of power, and he’s one of the series’ best villains, albeit not any stronger as a character than anyone else. The conclusion shows the corrupt corporation winning out over the reporter’s attempt to expose them, though by the next film, their successful cover-up becomes irrelevant to the franchise’s direction.