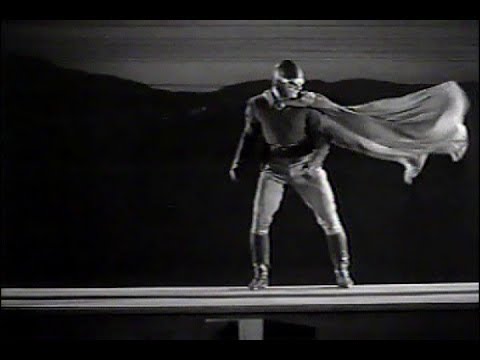 Of the various comics franchises adapted for serials, the two "best dressed" of the batch both hailed from the long defunct Fawcett Comics: Captain Marvel, portrayed by Tom Tyler, and Spy Smasher, incarnated by Kane Richmond. Compare the shoddy treatment of Batman in the 1943 serial, and one can see that the two Republic serials evinced a lot more quality control as to the hero's physical depiction.

William Witney co-directed the Captain Marvel serial alongside frequent collaborator, but he's the only credited director for SPY SMASHER. Witney keeps the action much more frenetic here than it was in CAPTAIN MARVEL, not even bothering to give the hero an origin. Though it's been said that during filming the script didn't initially start out by specifying the nationality of the protagonist's enemy spies, it was reworked to reflect the U.S.'s embroilment in the war in Europe. So viewers never find out how Alan Armstrong-- whose past is largely a blank, except for having a twin brother named Jack-- happens to don the regalia of Spy Smasher. He's first seen barreling into a Vichy stronghold for reasons that are never clear, and though he's doing what most comic-book superheroes could get away with, he's captured right away. The sight of the bare-chested hero being subjected to whipping-- albeit off-camera-- still resonates with the fears of Americans for the fate of "their boys" overseas.

Spy Smasher escapes a firing squad thanks to the help of a member of the French underground, and for the next eleven episodes he pursues a number of anti-spy activities-- foiling a Nazi counterfeiting ring, destroying an experimental Axis "bat plane," rescuing the same French underground guy who saved him. The only thread connecting all of these activities is a spymaster known as the Mask (Hans Schumm), also a regular villain in the Fawcett comic-series. I haven't read a lot of the original Spy Smasher comics, but the Mask comes off as a weak villain. He's usually seen giving orders to underlings, usually without the use of his signature face-mask, but he doesn't come off as having any real personality.

In contrast, though Spy Smasher has no real background, Richmond gives the hero an aura of fearless derring-do equal to the best of Hollywood's A-level swashbucklers, as well as giving a distinct feel to the character of twin brother Jack. (That character's full name, by the bye, is the same as that of a 1933 radio-serial hero, who wouldn't get his own serial until 1947). The SPY SMASHER review at FILES OF JERRY BLAKE provides the info that this was one of the last serials to use actual locations as backdrops for the action, and the staging of the action on these memorable sets is also as good as anything in the A-films.

The serial's female lead Eve Corby (Marguerite Chapman) is also taken from the comics, but in the serial her only function is to be the fiancee of brother Jack, so the actress has little to do. Few of the other characters stood out for me, and the best I can say of the talking-head scenes is that Witney disposes of them efficiently.

In addition to the aforementioned "bat plane," there are a couple of other super-science gimmicks that move this serial into the realm of the marvelous-- for instance, a two-way television-communicator aboard a submarine, through which the Mask speaks with his Axis commander. There's a strong but not overbearing patriotic vibe throughout the story, particularly when a particular character sacrifices himself for the cause, and this gives SPY SMASHER a bit more gravitas than the average chapterplay.

Posted by Gene Phillips at 1:52 PM
Email ThisBlogThis!Share to TwitterShare to FacebookShare to Pinterest
Labels: combative adventures, the marvelous