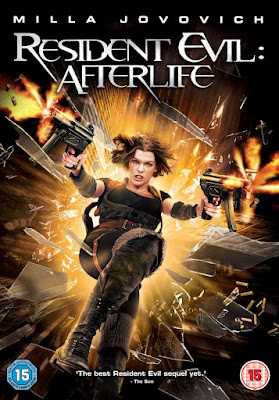 I suppose the “afterlife” of the title is meant to describe the life the heroine experiences once she loses her virally enhanced super-powers. Despite the return of Paul W.S. Anderson to writer-director status, AFTERLIFE is a mixed bag. On the plus side, the film boasts action-sequences as strong as those in APOCALYPSE. On the minus, the plot seems even more unfocused than usual, and the film suffers for not having a strong villainous presence throughout.

A year after EXTINCTION, Umbrella CEO Albert Wesker is the target of an attack by Alice and her obedient clone-army. Wesker escapes the attack as such in a plane, but the original Alice overtakes him. The evil CEO, however, has not only injected himself with T-virus so that he’s begun to mutate, he also manages to zap Alice with a fast-acting anti-virus that removes her superhuman abilities. Just as Wesker prepares to execute his longtime foe, the plane crashes. Alice survives despite her lack of powers, while Wesker goes missing.

Later Alice seeks to find the handful of survivors she helped in EXTINCTION. She’s attacked by one of those survivors, Claire (Ali Larter), but only because an Umbrella device was used on the woman to make her into a berserker. Once Claire is back to normal, the two females join up with a bunch of new characters, one of whom is another game-entity, Claire’s brother Chris. However, for reasons never made clear, Umbrella operatives are busy unleashing zombies on the survivors. After many redshirt-deaths, Alice tracks down the Umbrella malefactors and find out that Wesker is still calling the shots—leading, naturally, to another big battle.

The battles, as stated, are visually pleasing, but at times Alice doesn’t seem all that de-powered, since in the climactic scene her arm is impaled all the way through by a knife, and she still manages to fight and defeat the evildoers. I get the feeling that Anderson wanted to introduce her “humanization” for a quick character bit, but that he didn’t really want it to get in the way of major havoc.

Posted by Gene Phillips at 3:36 PM
Email ThisBlogThis!Share to TwitterShare to FacebookShare to Pinterest
Labels: combative adventures, the marvelous