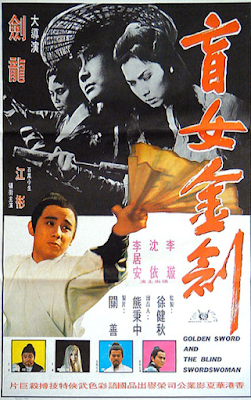 One of the few online English-language reviews for this film comments that it appears to be a Taiwanese knockoff of the popular Japanese ZATOICHI film-series, which concerned the adventures of a wandering masseuse, who displayed formidable swordfighting skills despite being blind. I don't usually mind a knockoff as long as the filmmakers show at least a fair grasp of what elements made the original appealing to audiences.

SWORDSWOMAN is without a doubt one of the worst knockoffs I've seen in recent years. The makers might have done better just to grind out a typical revenge-themed chopsocky, but this flick makes the mistake of trying to emulate the dramatic texture of the Japanese series. Though not all of the Zatoichis are stellar, even the weakest I've seen are at least decent melodramas.

If indeed writer-director Lung Chien was indeed imitating the storylines of the blind masseuse, the filmmaker seems to have become fixated on the notion that good melodrama depends on lots of characters springing surprises on one another (which we do get in some Zatoichi flicks, though not to the point of absurdity). The central character, comely young Han Ching-Ching (Li Hsuan), has the misfortune to see an evil man, Mister Lee, slay her father before also wounding Han so that she goes blind. At some point Han receives sword-training from a wandering swordsman, who may (if the dubbing can be trusted) be Han's cousin. Han also encounters yet another blind girl who is related to Lee, but who befriends Han for some reason. After a lot of talking-heads scenes between various characters, most of which have little dramatic point and scant physical action, there's a climax in which Han avenges herself on Mister Lee and meets the mother Han thought dead.

The fact that the film ends with the reunion of a heroine and her mother is about the only thing that distinguishes the movie from a billion other chopsockies, but it's not enough to make up for deadly dullness. Li Hsuan had made about a dozen films before this one, some of which seem to be in the kung-fu genre, but in her few swordfighting scenes she seems well coached but not actually fluid in the art of fake-fighting. I don't recognize any of the films in her repertoire or in that of director Lung, but that may not be a reflection of the overall quality of those films: they just may be works not often packaged to American audiences if they were produced in locales other than Hong Kong.

Posted by Gene Phillips at 12:56 PM
Email ThisBlogThis!Share to TwitterShare to FacebookShare to Pinterest
Labels: combative adventures, superlative skills (u), the uncanny