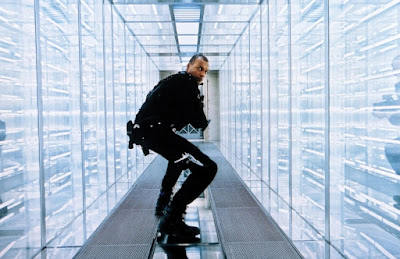 The RESIDENT EVIL series is surely among the most profitable adaptations of a video game into the cinematic medium. With the exception of a 2021 reboot, whose box office may have been affected by the China Virus, all the episodes in the series proved profitable, despite widespread critical disdain.

Since I don't play video games, I come to the series without any investment in the original concept. I know that the EVIL game was a celebrated example of the "first-person shooter" game, and director Paul W.S. Anderson, who had already scored with his 1995 adaptation of the MORTAL KOMBAT game, certainly works a lot of shooting into the first installment of EVIL. In contrast to KOMBAT and the later episodes of EVIL, the first film largely takes place in one facility wherein many SF-themed menaces lurk, and this sense of confinement in a may have contributed to the success of EVIL, Part One. Later films would play up the superhuman prowess of main character Alice (Milla Jovovich), but here the heroine still seems human-sized, so I'm not sure how much her presence had to do with the series' commercial success.

The most mythic aspect of Part One is the opening description of the Umbrella Corporation, a conglomerate with many irons in many manufacturing fires. However, Umbrella unleashes chaos when it experiments with "bioweapons" for the illegal weapons market. Beneath the surface of the risibly named Raccoon City, the corporation maintains a facility, the Hive, in which a bioweapon called the "T-virus" had been developed. A mystery thief both steals the weapon and contaminates the facility with the virus, turning most of the staff into flesh-munching zombies.

Alice, who is eventually revealed to be an agent investigating the virus, has lost her memory at the movie's opening. She and another resident of Raccoon City are taken prisoner by commandos working for the corporation on general suspicion, and the commandos rather oddly decide to take these two civilians with them into a mission to delve into the Hive's status. Everyone in the group gets trapped in the Hive, not only by the zombies but also by the Red Queen, a computer intelligence controlling the Hive's weapons and security systems. (The name of the heroine and of the computer, though patently referencing the works of Lewis Carroll, don't add up to much of anything here or in future installments.)

I enjoyed the first film reasonably well as a decent timekiller, particularly for the gutsy performance of Michelle Rodriguez as a female commando, one who makes numerous re-appearances later on. But the limitations of the $30 million budget are at times apparent, and so the sequels, given more bucks once the first proved profitable, provided more high-octane action for the audience's dollars.

Posted by Gene Phillips at 1:52 PM
Email ThisBlogThis!Share to TwitterShare to FacebookShare to Pinterest
Labels: combative adventures, the marvelous