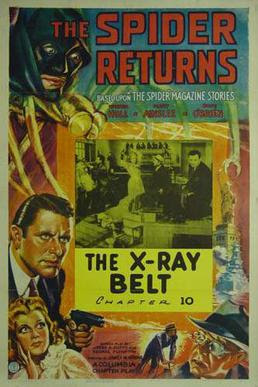 Since THE SPIDER'S WEB made money for Columbia, one might have thought that the production team would try to follow the template of that serial closely for the sequel. Instead, RETURNS is a strange farrago of misfires, so much so that one could  almost imagine that it was made by people who had nothing to do with the first entry.

The fact that only one scripter from WEB, George Plympton, collaborated on RETURNS may be the reason the latter film is so aimless, lacking the former's strong set-pieces and dialogue. Another factor may be that this time James W. Horne, who shared co-director credit on WEB with Ray Taylor, was the sole occupant of the director's chair this time. While RETURNS is not rife with as many "baggy-pants" moments of comedy as other Horne offerings, being on his own may have allowed him to be less concerned with quality control. Of the original cast, only Warren Hull and Kenne Duncan, playing respectively the Spider and his aide Ram Singh, reprise their roles. Secondary aide Jackson is now played by Dave O'Brien, who furnished stunts on WEB, while Mary Ainslee steps in as female lead Nita Van Sloane. As in the first serial, there are multiple suspects as to the identity of the main malefactor. But whereas in WEB the Octopus remains in his sanctuary while giving orders to his henchmen, the new villain in town, the Gargoyle, is conspicuous for running around on errands of  violence his men, despite the fact that his cowl-mask and robes make him fairly conspicuous.

Other differences may have been stemmed from the reception of the first serial by audiences. Whereas in WEB the Spider mowed down a goodly number of disposable thugs with his twin handguns, this time the hero barely uses his weapons at all, and there are many more slug-nutty scenes in which the arachnid avenger takes on five-six crooks at once in wild, windmilling battles, often ending with the Spider overwhelmed. Yet the plot of RETURNS might have allowed for more violence, for this time the villains are rooted in a real-world threat. Though the serial was released in May 1941, half a year before the US entered WWII, and though the Gargoyle is not explicitly tied to the Axis, the mastermind and his gangsters are all saboteurs seeking to weaken America's defense systems. Yet, not until the last few episodes does one see the characters make any patriotic speeches.

The Gargoyle does resemble the Octopus in one regard: though most of both villains' weapons are either naturalistic or uncanny, each of them has just one marvelous resource. In WEB it's a beam that zaps airplanes, and in RETURNS it's a bizarre X-ray machine that allows the villain to spy on people over great distances. (The gizmo thus combines not only the ability of Superman's X-ray vision but also his so-called "telescopic vision.") The X-ray machine is a goofy looking apparatus, full of gimcrack add-ons, so its appearance may be in line with Horne's sense of humor. A couple of more "straight" traps include a conveyor belt that almost delivers the Spider to a furnace, and a room gimmicked with both blazing fires and with closing walls lined with spikes.

Warren Hull still gets all the requisite heroic moments, as well as delivering some comic relief as his fake criminal identity Blinky McQuade. But Duncan hardly gets any of his oddball Sikh homilies, while Ainslee is relegated to a much less feisty version of Nita Van Sloan. Nita does handle a gun ably once or twice, but she shies away from fights with the henchmen. Even when pitted against another woman-- a grotesque crosseyed woman-- this Nita only barely manages to overpower her foe by loosely pressing a pillow over her face. The angle about Wentworth telling Nita that he intends to quit being the Spider is only marginally referenced due to the crusade for national security.

SPIDER RETURNS is certainly not the worst serial ever, and the aimless plot does pick up a little in the end chapters, during which the Gargoyle kidnaps Nita and the hero, assuming his Blinky guise, infiltrates the gang to "reluctantly" take possession of her, a trope later used to great effect in Tarantino's DJANGO UNCHAINED. RETURNS is just one of the many serials where the sum of the parts don't add up into a pleasurable whole.

Posted by Gene Phillips at 2:57 PM
Email ThisBlogThis!Share to TwitterShare to FacebookShare to Pinterest
Labels: combative adventures, the marvelous