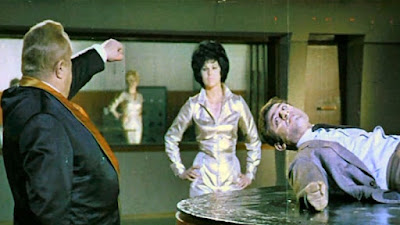 The many James Bond knockoffs often get deemed "cartoonish" even when they're not intended as comedies. However, I doubt if any of the knockoffs embrace the total craziness of animated cartoon shorts.

JAMES TONT OPERATION UNO (the hero's name references the Italian word for dumb, "tonto") starts off with the sort of sitcom absurdity seen in the GET SMART teleseries. After an early encounter with "Eric Goldsinger," the film's spoof of the Bond-villain Auric Goldfinger, Tont (Lando Buzzanca) chats up a pretty young thing and gets her to meet him in his hotel room. In contrast to the everlasting cool of the Connery Bond, Tont acts like a loon with his hunger to get laid. This makes it easy for the girl, who is one of Goldsinger's agents, to dope him and cover him in gold paint. The only thing that saves Tont is that the girl runs out of paint and doesn't manage to cover all of his pores.

So far, just like GET SMART. But a little later, as Tont pursues the villain in an effort to learn his plans for "Operation April Fool," Goldsinger (Loris Gizzi, a close physical match for Gert Frobe) traps the agent in a room with a ceiling designed to descend and crush him. Tont is saved by the intervention of a talking mouse who leads him to safety. When he expresses incredulity about this event to fellow agent Barbara (Evi Marandi), she explains that the mouse didn't really talk; she was just a ventriloquist-- as if that made the matter more logical.

Though UNO is certainly never subtle, it does manage to spoof a lot of the superspy-tropes at least as well as GET SMART. In the inevitable "briefing with the weapons maker" scene, the film's version of Bond's Q-- called "Z," of course-- happens to be a ramrod-stiff Prussian whose weapons-tests keep killing off his assistants. Tont fares better than the lab guys with some of the weapons he takes into the field, such as a car that drives underwater (with the goofy spy singing to the "fishies" as he goes along). But as soon as Tont returns to land, he's captured by a dozen or so bikini-banes with machine guns as well as by "Kayo," the film's version of Oddjob.

Like most Bond-imitations, this one is slackly plotted, as Tont veers from one episodic peril to another (though the film does give us a comic version of GOLDFINGER's "no, Mister Bond, I expect you to die" scene). Director Bruno Corbucci and Giovanni Grimaldi (also the scripters) don't make Tont much of a fighter, even within a comedy context, but he does qualify as a combative figure thanks to his use of super-science weapons like a teargas gun and rockets that launch him into the sky. In fact, his aide Barbara outshines him in physical power, albeit once again in cartoony fashion. Not only does she knock out the powerful Kayo with a half dozen karate chops-- Kayo, who impassively endured a couple dozen blows from Tont earlier-- Barbara even gets a stalled plane to get moving by pushing it along the tarmac (with one hand, yet).

Operation April Fool proves to be a plot to destroy the United Nations with a vinyl record that emits deadly sonic waves. Tont performs his best feat here, flinging the record up so high that it blows up the helicopter in which Goldsinger is overseeing his operation. This too gets a cartoony cutaway, as Barbara pictures Tont in the costume of a discus-thrower. The movie ends with another appearance of the talking mouse. 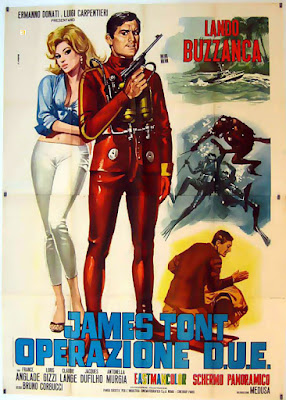 The second and last Tont exploit was only available to me in the Italian language, even though many years ago I saw an English-language version entitled THE WACKY WORLD OF JAMES TONT. However, from what I call tell, the "anything can happen" aesthetic of the second entry, based on both THUNDERBALL and YOU ONLY LIVE TWICE, remains in force. Buzzanca returns as Tont, while Loris Gizzi, who was Goldsinger in the first film, essays the role of a villain who's compared to THUNDERBALL's Emilio Largo. None of the characters from the first film appear, and in place of the Prussian weapons-maker "Z," the bad guys have a scientist who's code-named "Y." Cartoony events include a man being flattened to a papery image of himself by a mechanical presser, two grown people being carried into the air by a small balloon, and Tont helping his new girlfriend escape her prison by gnawing through the metal bars with a pair of beaver-teeth inserted into his mouth.

I give both flicks a mythicity rating of "fair" because they do a decent job of taking the "straight" tropes of the original Fleming stories and playing them for lunacy.

Posted by Gene Phillips at 2:36 PM
Email ThisBlogThis!Share to TwitterShare to FacebookShare to Pinterest
Labels: combative comedies, the marvelous