THE EXTERMINATORS OF THE YEAR 3000 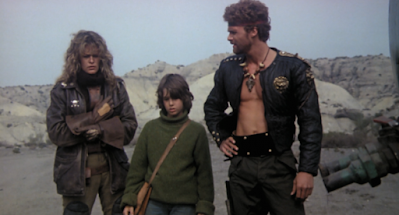 Perhaps because so many MAD MAX clones aren't even able to produce adequate copies of the original, I give slight props to Giuliano Carnimeo's EXTERMINATORS OF THE YEAR 3000. The movie is extremely derivative of the 1981 ROAD WARRIOR, but at least the filmmakers understood the appeal of the thing they sought to imitate.

It's yet another post-apocalyptic world, in which people still drive 1970s cars over a thousand years later. Early in the film, the risibly named hero Alien (Robert Iannucchi) makes his appearance in one such tricked-out car-- which he calls "the Exterminator"-- as he uses his ride to kick the asses of a couple of corrupt (and apparently decomissioned) future-cops. Concurrently, there's a small settlement of plucky farmers who are trying to locate water to nurture their remaining crops. Seeing his community in dire straits, a young boy named Tommy (Luca Venantini) goes in search of water, just as his missing father did in weeks previous. Tommy never finds his father as I recall, but he does come across Alien, and after lots of verbal sparring, Tommy convinces Alien to help him look for some fabled source of water.

Their search is complicated by a band of desert marauders in their own tricked-out vehicles (which apparently never need to have their radiators refilled). The raiders' leader is Crazy Bull (Fernando Bilbao), who gets a lot of raucous lines where he calls his subordinates "mother grabbers." Bull's lieutenant is a sexy black woman with a claw-hand (Beryl Cunningham).

The film's other major character is Trash (Alicia Moro), an old lover of Alien's. Given that Alien left her alone in some desert-- commitment issues, right?-- their reunion is something less than amicable. Nevertheless, Trash allies herself to Alien and Tommy and joins the quest in search of water.

There are some decent if unexceptional fight-scenes and chase-scenes, and a little more conflict between the stoic (and sometimes insufferable) hero and his allies than one usually gets in the genre. It's certainly never good drama, and the resolution, which involves a band of cultists hoarding water, seems plucked out of nowhere. But as long as one keeps one's expectations low, EXTERMINATORS is an OK diversion.

Posted by Gene Phillips at 1:29 PM
Email ThisBlogThis!Share to TwitterShare to FacebookShare to Pinterest
Labels: combative adventures, the marvelous