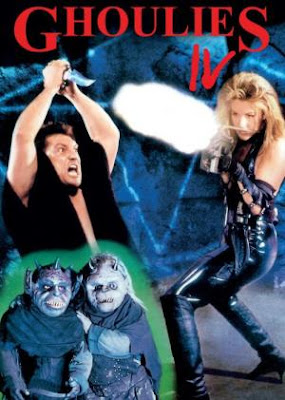 GHOULIES IV, the last in the series, remains in the same comedy-mythos as the third flick. Yet strangely, director Jim Wynorski and writer Mark Sevi mold the flick to resemble the first film in many respects, which as I said in my review had largely borrowed its plot from Lovecraft's THE CASE OF CHARLES DEXTER WARD. This partial fidelity may come from Sevi, who from the years 1992 to 1995 worked on SEVEN sequel-flicks in addition to this one.

I argued that the first GHOULIES emphasized the magician (Michael Des Barres) who summoned the titular demons as part of a plan to possess his grown son (Peter Liapis) for a power-enhancing ritual. The daddy-magician is never directly referenced, though a couple of archival shots of the Des Barres character are included, and the specific circumstances of the Liapis character, Jonathan Graves, are altered in many respects. Thus the guy who almost got possessed by the spirit of his dead father is now a guy who mucked around with occultism in earlier years, partly because both he and his then-girlfriend Alexandra (Stacie Randall) were both into it. But in a barely coherent backstory, somehow they unleash an evil version of Jonathan from the same other-dimension where the Ghoulies live. Alexandra likes Evil Jonathan better, has sex with the evil double, and then is sent to an asylum when she tries to kill Good Jonathan.

All this is revealed toward the end, as if Sevi didn't really want to bother with such details. When the film opens, Alexandra, dressed in sexy bondage-wear, has escaped the asylum and is seeking to make possible the rebirth of Evil Jonathan, who for some vague reason has taken the classical name "Faust." (A subliminal reference to "the Great Fausto" in GHOULIES II, maybe?) In order to revive Faust, Alexandra sacrifices a bunch of innocent victims, but she can only bring Faust into the human world with the help of an amulet, the Jewel of Knowledge. She tries to do so, and bungles the ritual, losing the amulet and also bringing two benign Ghoulies into her world. The two demons, this time played by little people actors, just want to go home, and they go looking for Jonathan for help.

Jonathan by this time has hung up his horned hat for a badge. He's also much more of a stud than the first version, for he's broken up with hot policewoman Kate (Barbara Alyn Woods), who is now his superior on the force, and he currently dates a hot prostitute. While investigating the recent deaths, he stumbles across Alexandra but doesn't immediately reveal that she's an asylum escapee. He and Kate argue about procedure while Jonathan investigates the murders on his own. Alexandra ambushes Jonathan with a mesmerized cop, and Jonathan reveals that he hasn't forgotten his occult past, since he shoots rays from his fingers and banishes the possessed cop to the otherworld.

There's a lot of aimless episodic stuff that happens before Jonathan somehow intuits that Alexandra, having recovered the amulet, is going back to her old asylum to perform a ritual for summoning Faust, Kate, still in love with Jonathan, follows. Jonathan and Kate dole out some good fisticuffs, but Alexandra still manages to allow Faust to possess Jonathan's body. Oh, and the Ghoulies putz around for a while before making a slight contribution to the happy ending. There's also a sequel hook at the very end, which happily did not lead to any more entries.

The script is without doubt cheesy, but thanks to the pulchritude, the fight-scenes and a (very few) funny lines, it's more palatable cheese than GHOULIES III. My only other observation is that whereas Jonathan Graves got sidelined to the evil magician in the first movie, this time he's the main character, inconsistent as he is.

Posted by Gene Phillips at 3:46 PM
Email ThisBlogThis!Share to TwitterShare to FacebookShare to Pinterest
Labels: combative comedies, the marvelous