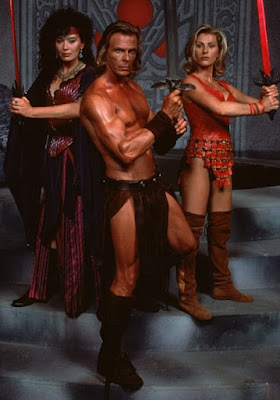 Long after the 1982 BEASTMASTER, directed by Don "Phantasm" Coscarelli, debuted in theaters, the saga of the barbarian Dar, who fought for justice in his fantasy-otherworld, got a couple of sequels. As I remember, the 1991 BEASTMASTER 2 was at least watchable, despite cutting costs by letting Dar wander into a time portal that took him into 1990s Los Angeles.

The second and last sequel is not improved by keeping the hero on his own turf. Though writer David Wise had distinguished himself with some decent scripts for American animated teleshows like the seventies STAR TREK and the nineties BATMAN, EYE OF BRAXUS is a lazy, by-the-numbers example of a sword-and-sorcery tale. There are a couple of other S &S movies that are even worse than BRAXUS, but maybe no more than a half dozen.

Dar (Marc Singer), now accompanied by a lion rather than his standard tiger, accepts a mission from his king-brother Tal (seen in the first film, though here he's played by Casper Van Dien). Dar must seek out the evil sorcerer Lord Agon (David Warner), who sacrifices innocents to prolong his life, and who plans to release the evil god Braxus from his prison in a mystic gem. On his way to take down Agon-- whose name is Greek for "contest"-- Dar picks up a handful of helpers, played by such familiar faces as Tony Todd, Sandra Hess and Lesley Anne Down. And that's pretty much the whole plot.

I might not have objected to such a formulaic scenario had director Gabrielle Beaumont, who'd been directing TV episodes since 1974, had given the fight-scenes any heft, given that this is what S&S fans particularly want to see in the genre. But all of the brawls are low-energy, even from Sandra Hess, who distinguished herself not only in more expensive productions like MORTAL KOMBAT: ANNHILATION but also minor B-movies like the 1994 ENDANGERED.

Lesley Ann Down tries to add a little humor as a wisecracking sorceress, but her jokes just underscore that everyone in this fantasy-world talks like their last residence was in Encino. Aside from star-spotting, pretty much a total waste of time.

Posted by Gene Phillips at 3:35 PM
Email ThisBlogThis!Share to TwitterShare to FacebookShare to Pinterest
Labels: combative adventures, the marvelous