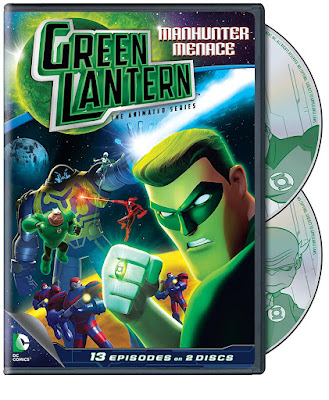 I mentioned in my review of the first half of this one-season animated series that the producers might have bifurcated the 26-episode series into two distinct (albeit interdependent) story-arcs largely to facillitate DVD packaging of the series. But this division proves valuable to me as well. Instead of judging the series as a whole, in which case I would probably give it only a "fair" mythicity rating, here I can evaluate each story-arc independently.

The first arc of the series, in addition to introducing any new viewers to the cosmos in which the Green Lantern of Earth exists (the corps of law-enforcers to which he belongs, the Guardians who empower their mission), also concentrates on depicting the Lantern Corps' new competitors in energy-manipulation. One group, the Red Lanterns, is openly hostile to the Green space-cops, while others, of Blue and Violet persuasions, are largely benign. In the original comics from the late 2000s, nine color-coordinated power-users were finally established, and the second arc add just one more hue to the program, in the form of an Orange Lantern. But once the nasty Red villains are defeated in the first arc, the second arc begins by largely de-emphasizing the "color guard" aspect of the cosmos takes a back seat to the status of artificial intelligence in this fictive universe.

To be sure, the early introduction of the Aya character foregrounds this later development. When Hal Jordan (the Earth Green Lantern) and his alien comrade Kilowog begin their quest to thwart the Red Guys, the sentient navigational computer aboard their starship decides that she wants to emulate their heroism, and so forms her own robotic body (which Hal dubs "Aya" for "AI.") When this three-person ensemble expands to include Razer, a remorseful Red Lantern, the two new kids on the block evince muted romantic feelings for one another-- thus setting up one of the main story-threads of Arc II.

In place of the first arc's employment  of multi-hued ring-wielders, MANHUNTER MENACE dovetails two separate opponents from DC comics serials, linked only by some association with the Guardians of the Universe. The titular Manhunters follow the basic rudiments of their comics-counterparts. All are super-advanced robots invented by the Guardians to serve as an intergalactic police force, only to be mothballed when the Guardians realized that the Manhunters, lacking emotion, could not execute an even-handed justice. The second opponent, the Anti-Monitor, was in the comics an extra-dimensional being devoted to the idea of exterminating all life. His signature appearance was in 1986's CRISIS ON INFINITE EARTHS, wherein his existence is loosely linked to an even earlier act of hubris by one particular Guardian, name of  Krona. This Guardian is obsessed with learning the forbidden origins of the universe, as elaborated in the 1965 Green Lantern tale SECRET ORIGIN OF THE GUARDIANS. In MANHUNTER MENACE, Krona is briefly referenced, but his hubris is confined to creating yet another super-robot, the Anti-Monitor, which immediately dedicates its existence to wiping out organic life. Episode 14 of the GL series establishes that the Anti-Monitor, for a time banished to another dimension, has returned to Hal Jordan's cosmos and has enlisted the Manhunter hordes as its agents.

Though I felt rather iffy about the series duplicating the Frankensteinian motif for both the Anti-Monitor and the Manhunters, the writers managed to sell it by relating their mechanical opposition to life to Aya's forlorn struggle to attain humanity. When Aya expresses love for Razer and is rejected-- largely because Razer is a widower and doesn't feel capable of loving again, much less loving an artificial being-- she ends up becoming bonded with the Anti-Monitor. Thus the super-robot's quest to extirpate inefficient biological life becomes Aya's drive to eliminate the painful sphere of human emotions from existence-- even to the extent of rewriting "the Big Bang," using imagery patently copied from the above SECRET ORIGIN comics-tale.

Like the previous arc, MENACE intersperses its long-range plot with short, more-or-less self-contained stories. These are usually no better than fair, even when they introduce plot-threads important to later stories. (For instance, in "Blue Hope" Razer attempts to assimilate the disciplines of the Blue Lanterns to sublimate his ferocious emotions, and this gives him a technique he uses to good effect in the next to last episode.) Most of the standalones seem oriented toward introducing other characters from the comic book mythos for possible later use had the series lasted longer, including not only the aforementioned Orange Lantern but also versions of Sinestro and Guy Gardner. Carol Ferris makes her only appearance in this arc in "Love is a Battlefield," but though she once more transforms into the show's version of the comics-character Star Sapphire, her character in both of her identities proves underwhelming.

Nevertheless, the master story-thread of Aya's status as a AI looking for love, and rediscovering both her true nature and her inner potential in the final episodes of the arc, and so, even without the chance to further develop this cosmos, it still ends on a high note, and may be the best thing to have come out of the misfire of the 2011 live-action film.

Posted by Gene Phillips at 2:08 PM
Email ThisBlogThis!Share to TwitterShare to FacebookShare to Pinterest
Labels: combative adventures, the marvelous