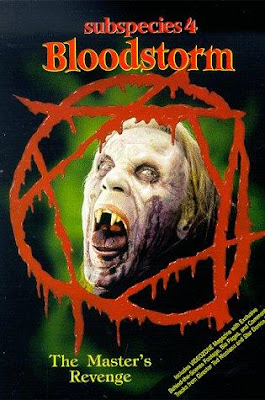 The streaming version I watched bore the title SUBSPECIES THE AWAKENING, but I've defaulted to the earlier title with the "blood-word" in it just to match my other recent reviews of this oddball series.

The last "Subspecies" film came out roughly four years prior to the third movie in the series, which suggests to me that funding for this effort didn't manifest right away. Writer-director Ted Nicolaou certainly left the gates open for another installment at the end of BLOODLUST, for even though evil bloodsucker Radu Vladislas seemed to have been definitively destroyed at the climax, Nicolaou shows some of those little blood-manikins (the barely-used "subspecies" of the series-title) roaming around-- which apparently account for Radu's rescue from perdition next time round, though the actual resurrection is not depicted.

Nicolaou certainly didn't bring the series back because of any investment in his support-cast. In the last scene of BLOODLUST, Radu's perpetual target Michelle (Denice Duff) is seen being driven away by her sister and the sister's friends, but in a quickie car-crash, all of these characters except Michelle are slain out of hand. Romanian nurse Ana (Ioana Abur) happens across the crash-site and becomes Michelle's de facto caretaker, protecting the young vampiress from the rays of the sun. Ana takes Michelle for examination by her former teacher, Professor Nicolescu, without knowing at the time that Nicolescu is also a vampire, though he's been able to control his bloodsucking urges with chemistry. Upon interviewing Michelle, Nicolescu learns of that plot-device the Bloodstone, and he covets it.

Meanwhile, Radu, who possesses the Bloodstone, is still bent on recovering Michelle. He travels to Bucharest to obtain funds from a former fledgling, Ash and his partner Serena, who had appeared the year before in the stand-alone spinoff movie VAMPIRE JOURNALS. Serena makes an attempt to play the two male vamps against one another, but this doesn't add much to the plot. When Radu tracks Michelle down to the professor's home, Nicolescu catches the vamp in an impalement trap. Michelle, implicitly still somewhat bound to Radu since drinking his blood, falls under his control and frees him, after which both flee to Radu's crypt. Serena tries to get Ana to do her dirty work by ambushing Radu, but when Ana and Nicolaou arrive at the crypt, Radu kills the professor. Echoing the end of BLOODSTONE, Radu tries to make Michelle kill her new friend, but Michelle wounds the vamp and Ana finishes him off. Ash and Serena are then waiting in the wings to pick up the pieces, but by chance they're forced to flee a blast of sunlight, which presumably leaves them alive for their (slightly later) execution in VAMPIRE JOURNALS.

There's not a lot of resonance to all these back-and-forth struggles, and Nicolaou missed his chance to end the series on a high note by letting Michelle extinguish her unwanted pursuer, who is also the slayer of her true love (even if the latter gets scant mention in later installments). Nicolaou might have had Michelle decapitate Radu once and for all, bringing her character-arc to fruition. Instead, when Michelle is given a scythe to destroy Ana, she only partly cuts Radu's throat, making it necessary for Ana, a relative stranger, to finish the job. But at least BLOODSTORM ends with no further intimations of additional chapters, and that's closure of a sort.

Posted by Gene Phillips at 2:08 PM
Email ThisBlogThis!Share to TwitterShare to FacebookShare to Pinterest
Labels: the marvelous