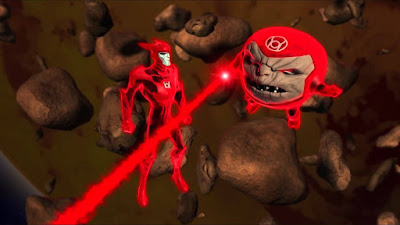 GREEN LANTERN THE ANIMATED SERIES enjoyed only one season, thanks in part to the disappointing box office of the 2011 live-action film.  However, one interesting aspect of the show's 26 episodes is that they show a neat bifurcation, devoting the first 13 episodes to one principal menace, the "Red Lanterns" of the title, while the next 13 are devoted to a pair of interlinked menaces, the Anti Monitor and his robot servants the Manhunters. This may have been intentional for purposes of DVD packaging.

I can't compare the first 13 episodes with their source material, since I have not read most of the various "rainbow of Lanterns" storylines introduced by DC Comics in the 2000s. In these stories, the members of interstellar Green Lantern police force, who administer justice through the "green power" in their rings, learn that there exist a literal "spectrum" of other power-wielders attuned to other color-manifestations. RISE only depicts three of these competitors, a group of Red Lanterns, who are motivated largely by rage, a coterie of Blue Lanterns, who empower themselves with hope and tranquility, and a planet of all-female Violet Lanterns, who center their energies on the emotion of love.

The Reds, led by the Big Bad Atrocitus, supply the main plot-action by launching a series of sneak attacks on individual Green Lanterns. Hal Jordan, the Green Lantern of Earth, shows himself to be a brash alpha male by launching his return strike against the enemy, quite without the approval of the Green Lanterns' perceptors, the immortal but slow-to-act Guardians. At first Jordan, who swipes a ship from the Guardians, is joined in his quest only by his old trainer Kilowog. However, the ship's computer, an AI with a feminine personality, becomes sufficiently invested in their struggle to manifest her own android body to aid them. In addition, the two Lanterns encounter Razer, a Red Lantern suffering remorse from having almost slain a planet in the name of Atrocitus. Jordan senses heroic potential in Razer and eventually brings him into the fold.

Some of the episodes are virtual stand-alone stories, occasionally modeled on comic-book originals, while the other entries pursue the course of the four-person crew tracking down Atrocitus and foiling his plans. Since the Big Bad is defeated in Episode 13, this makes for a certain closure before the next story-arc. Overall the scripts attempt to keep the mood light amid all the star-spanning action, but without neglecting the potential for outer-space "sense of wonder." No single episode in this arc stands out as particularly mythic, though Episode Nine comes close to the mark. In this story, the all-female Violet Lanterns attempt to suborn the Green Lanterns to serve them. When this doesn't work, their queen-- whose name is a play on one Greek word for love, "agape"-- summons Hal Jordan's Earthling lover Carol Ferris and transforms her into Star Sapphire. In the comics, Star Sapphire, who alternates between her ordinary "Jekyll" persona and a forceful "Miss Hyde" attitude, is one of Jordan's strongest opponents. In this series, though, Star Sapphire only appears twice, and the elements of her feminine psychology are not rendered with as much imagination as in the comics.

Posted by Gene Phillips at 2:44 PM
Email ThisBlogThis!Share to TwitterShare to FacebookShare to Pinterest
Labels: combative adventures, the marvelous