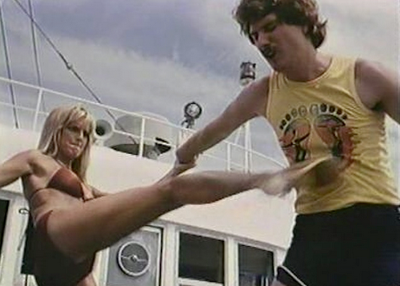 Although all the parameters for RAW FORCE-- phenomenality, mythicity, mythos-type and function-- are exactly the same as for the previous review BEASTMASTER 3, the 1982 cheeseball flick is far more entertaining in terms of its kinetic appeal. While BEASTMASTER 3 plays it safe, FORCE matches its name by throwing kitchen sinks galore at the sensation-hungry viewer.

The "metaphysical" content is even the same as the one in the other flick, for in FORCE there's a whole cult of vaguely Asian sorcerers who sacrifice people to gain immortality. But the immortality belongs to a bunch of long-dead martial artists, buried on some Caribbean island and deemed to have disgraced themselves in the eyes of decent martial artists, whoever they might be. The cultists pay a Hitler-lookalike go-between, name of Speer, to transport lots of nubile naked girls to the cultist's island, and whenever the girls are sacrificed-- which always happens offscreen-- the dead martial artists come to life as zombies. I'm not sure what the cultists get out of this, but being able to summon zombies to fight good martial artists comes in handy.

The good martial artists are a bunch of American amateur competitors, most of whom belong to the hilariously named "Burbank Martial Arts Club." They take a Caribbean tour on a ship commanded by boozy Captain Dodds (Cameron Mitchell), and on their way the tourists learn the legend of the forbidden island. One might expect the foolish Americans to trespass on the island and get in trouble, but instead the ex-Nazi Speer sends some of his henchmen to abduct the tourists for future sacrifice.

Though the action isn't especially well choreographed, and the violence is rather muted for an eighties zombie film, writer-director Edward D. Murphy keeps up a steady stream of boobs and battles. In addition to the generally pleasing Mitchell, FORCE also boasts two other luminaries of junk-entertainment: karate-kicking Jillian Kesner, who in the year previous had made an excellent kung-fu revenge-flick, FIRECRACKER, and Vic Diaz, a perennial presence in low-budget Filipino-made trash-films. FORCE is not even a minor junk classic, but in terms of holding the attention of thrill-hungry viewers, it more than fulfills its modest goals.

Posted by Gene Phillips at 4:32 PM
Email ThisBlogThis!Share to TwitterShare to FacebookShare to Pinterest
Labels: combative adventures, the marvelous