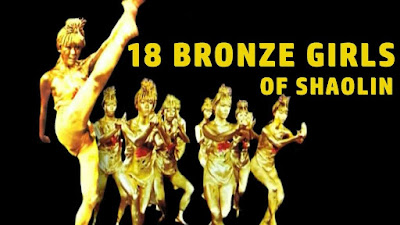 This Taiwanese flick was probably conceived as a quickie knock-off of Hong Kong's two BRONZE MEN films from 1976, reviewed here. Some data suggests that it was completed as early as 1979 but didn't get released until 1983-- which is about the most comprehensible thing about GIRLS. There are a lot of wack-a-doodle kung fu films out there, and GIRLS is just another one of them, a plotless melange of stunts and meaningless espionage.

An introductory voice-over makes reference to the invention of kung fu "thousands of years ago," though the action of the film must be post-1636, since that was the year in which the Ching Dynasty began. The heroes are apparently rebelling against the Chings, though there's no mention of any rival dynasties, and only one of the main characters is given a motive for being a rebel. This is the character played by Doris Lung Chung-erh, who may or may not be a person named "Pai Yu-fei," since at least two characters claim to be this person, and by the end of the film no final identification is made. Since Pai is motivated to fight the Chings because they killed her family, and since Lung's character opposes the Chings, there's a fair chance she was meant to be the "real Pai"-- though I don't think the writer cared about providing anything more than the sliver of motivation.

The Chings may or may not be behind the activities of an evil monk, Chi Kong, who wants to steal the training manual from a monastery where a one-eyebrow monk is training 18 female fighters, all of whom wear golden (not bronze) clothing and have their skins painted gold.  I guess the bronze girls somehow fall under Kong's control, since they end up fighting the good guys at various times, including a big crazy-fu climax.

In between stunt battles, the writer tosses out various dopey comedy scenes, mostly involving people masquerading as the opposite sex, or as differently abled, all for no real purpose. There are a few good stunts at the conclusion, and Lung's fighting is usually worth a look. The diabolical devices, like those of the BRONZE MEN, are mostly chambers outfitted with deadly devices, including huge artificial roses with thorns!

Posted by Gene Phillips at 3:48 PM
Email ThisBlogThis!Share to TwitterShare to FacebookShare to Pinterest
Labels: combative adventures, diabolical devices (u), outre outfits (u), the uncanny