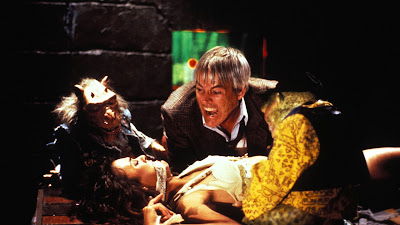 Empire Pictures sold the GHOULIES franchise to Vestron Video, and the filmmakers began following the more antic aspects of the GREMLINS concept. Possibly they had no great faith in the property, for the script was assigned to one Brent Olson, who evinces no other writing credits on IMDB, while the director's duties were assigned to John Carl Beuchler, in charge of makeup effects for the previous two GHOULIES entries.

There's a jot more continuity with the first film in that the Ghoulies, who were just out and about in the second flick, again must be summoned from their otherworld in order to wreak havoc. The fact that the ritual of summoning is encoded in the pages of a comic book also indicates that no one was too worried about the credibility of the plot. A moronic college student-- one of many on campus-- takes the comic with him into one of his classes, and it's confiscated by Professor Ragnar (Kevin McCarthy). Ragnar really hates the free-wheeling ways of the students, particularly those who unleash chaos with "prank wars." Ragnar accidentally performs the summoning ritual, and up pop a group of murderous Ghoulies. Ragnar doesn't have literal control of the fiends, but he possesses the comic, and if it's destroyed, the demons have to go back where they came from. As with the funhouse in GHOULIES II, the mean munchkins insert themselves into college life in order to covertly murder people. (This seems to be their only raison d'etre, despite the fact that for the first time the little monsters can talk-- although the level of their discourse is that of the Three Stooges.)

One of the main prank-guys is leading-man Skip (Evan MacKenzie), who's a little less stupid than most of the students, though Skip does want to win the prank wars against a rival fraternity. This silliness pisses off Erin (Eva LaRue), the girl Skip wants to win, though he also alienates her by showing too much attention to other nubile college girls. Skip is the one who eventually figures out that the pranks have got out of control, and so he and Erin become temporary heroes out to de-ghoul their place of learning.

The Ghoulies' antics and their supposedly funny use of human expressions are stupid, and the only actor who acquits himself fairly well is McCarthy, even though the part requires him to mug ferociously. Since GHOULIES II upped the ante for its climax with the creation of a "giant ghoulie," Beuchler does something similar at the conclusion, having Ragnar turned into a monster via a merger with the demons, though this seems to come out of nowhere and doesn't add any great thrills. Number Three thus gets the lowest grade of any film in this negligible series.

Posted by Gene Phillips at 3:16 PM
Email ThisBlogThis!Share to TwitterShare to FacebookShare to Pinterest
Labels: the marvelous