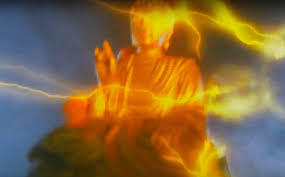 
These three ghostbusting fantasies from Hong Kong, all based loosely on a tale from medieval Chinese literature, still hold up fairly well today. However, in contrast to works that have managed to balance romance and action, such as THE SORCERER AND THE WHITE SNAKE, action gets a certain amount of short shrift here—possibly because the original story was more of a pure romance.

All three films focus on a young man coming into contact with either a female ghost or someone conceptually linked to a ghost, with Films One and Two using the same two leads while Film Three remakes the first film but changes the names and the backgrounds of the principals. Back in an indeterminate period of medieval China, tax collector Ning (Leslie Cheung) happens to spend the night in a haunted pavilion. He meets a pretty young thing named Tsing (Joey Wang) but doesn’t suspect that she’s a ghost for the first hour of the film, even though the supposedly deserted pavilion also houses a weird old matron and her all-female entourage. In due time Ning learns that they’re all ghosts, and that the matron is the demonic incarnation of a “Devil Tree” that likes to consume mortal souls. (A strong influence from the 1988 film EVIL DEAD has been argued.) On top of that, as if to perpetuate the evil customs of human beings, Tsing is due to be wed to an evil demon-lord.

Ning, as a humble scholar with no kung-fu training, is utterly out of his depth to fight demons, while Tsing has a few ghostly powers but nothing on the level of the Devil Tree. The comely couple are only saved thanks to the aid of a Taoist exorcist, Swordsman Yen, who provides most of the heavy lifting in the demon-battles. He even gives Ning a magical weapon of sorts, a holy scroll with a Buddhist sutra written on it, which proves useful in the splashy FX-battles. (I suspect one will not find such an over-dependence on explosions in classical Chinese literature. Ning and Tsing do give Yen just enough aid in these fights to qualify the first film as combative in nature, but the romance scenes, laced with cute comic touches as well, seem to have been the selling point.

GHOST 1 ends with Ning freeing Tsing from her ethereal imprisonment, which means that her soul is therefore free to become reincarnated. Thus as GHOST 2 begins. Ning wanders about for a time, moping over his lost love, until a townful of people mistake him for the leader of a group rebelling against the emperor. This plot-point is tossed off so as to stick Ning in jail very briefly, where he shares his cell with a scholar named Chu, who helps Ning escape. Ning also comes into contact with Autumn (Jacky Cheung), a young exorcist with assorted magical powers. (Before casting spells he says things like “hocus pocus” and “abracadabra”—and yes, he’s the source of most of the film’s comedy.) Autumn and Ning encounter a small group of rebels who dress up like ghosts but are entirely mortal. The rebels plan to liberate a man named Fu when a military unit transports him overland to the emperor’s court. The rebels are led by two comely sisters, Windy (Joey Wang) and Moon (Michelle Reis), and they all venerate Ning when they become convinced he’s the scholar Chu in disguise. Ning wonders if Windy could be the reincarnation of Tsing. He eventually decides that this is probably not the case, and indeed, though both Windy and her sister fall for Ning, there’s never any indication of continuity between the two Joey Wang characters. (Just before final credits, though, an ethereal-looking Joey Wang, implicitly Tsing, is shown smiling as she looks upon the unison of Ning and Windy—whatever that may mean.)

Though Windy and Moon command the rebel fighters, neither female displays any display any strong fighting-ability, and Ning participates in even fewer battles than he did in GHOST 1. (Thanks to some comic training from Autumn, Ning does learn the trick of freezing opponents with a magic spell.) The occult opponents this time seem more like demons than ghosts: there’s a big hulking stone critter that Ning and Autumn must vanquish, and Windy is briefly possessed by some sort of spirit. The cure for the latter ailment is entirely appropriate for a comedy-romance: Ning has to kiss her possessed lips and infuse her with his “yang energy.” The main villain is a phony Buddhist priest
who advises the emperor’s court, but he’s apparently a demon in disguise, since later he morphs into a giant centipede. The only thing that shifts the balance in the favor of Ning’s forces is the return of Swordsman Yen, and if anything GHOST 2 has even more lavish magical fights than did the first film.

GHOST 3, though, ratchets down the combative aspects even further. This time the earnest young mortal is a junior monk named Fong (Tony Leung Chia-wen), who travels with his aged exorcist master. Given that the master is a first-class demon-fighter, one would think that Fong might have a little mojo of his own, but such is not the case. Joey Wang plays a character with a new name, that of Lotus, but her situation is the same as in the first film: stuck in a haunted pavilion and enthralled to a Devil Tree. She too has next to no real power beyond flying around a little, and thus the old exorcist provides the demon-fighting this time. There’s one minor exception near the climax: the monk, unable to keep fighting, infuses Fong with enough energy to fly up to the sun, absorb solar powers, and use sunlight to dispel the demons—or ghosts, or whatever they are. This is a nice sequence, but Fong is just the vessel of someone else’s power, so GHOST 3 fails the test of the combative mode.

All three of them are enjoyable romantic romps, with decent FX, “haunting” performances from the lovely lead femme, and some funny comic moments, particularly a scene in GHOST 3 wherein Lotus gives new meaning to “giving tongue.” However, on the mythicity meter their use of metaphysical folklore never scores higher than “fair.”

Posted by Gene Phillips at 10:50 AM
Email ThisBlogThis!Share to TwitterShare to FacebookShare to Pinterest
Labels: combative adventures, the marvelous