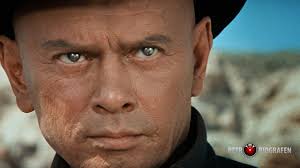 
The cleverest thing about Michael Crichton’s original screenplay for WESTWORLD is the name the author gives to the corporation that constructs all the android-populated tourist traps: “Delos.” The script never comments on the name, which is identical to that of the floating island where the Greek gods Apollo and Artemis are born, but it’s hard to believe Crichton didn’t have an agenda in using that particular name. This Delos, rather than giving birth to gods, gives birth to sophisticated androids, whose sole purpose is to act out violent or salacious scenarios for the entertainment of visitors. Since all of these encounters take place in pseudo-historical venues—Medieval World, Roman World, and Western World—in effect the human beings act the part of “gods” to the androids, “killing them for their sport.”

Even before HBO patterned a successful streaming series after Crichton’s concept, WESTWORLD enjoyed a certain iconic stature in science fiction cinema. It was, like the majority of pre-STAR WARS sci-fi, a cautionary tale, but Crichton’s script is a little vague about what he’s cautioning the audience against. In 1973 there had been no shortage of sci-fi films tasking man with his “inhumanity to inhumans,” but WESTWORLD doesn’t seem concerned with the ethical problems of the sufferings of androids. Nor does Crichton indict either the two main protagonists, Martin (Richard Benjamin) and Blane (James Brolin), or even the less attractive visitors seen at the film’s beginning. They aren’t seen as horrid brutes either because they screw lady androids or because they shoot down the Gunslinger Android (Yul Brynner, costumed just as the actor was in 1960’s THE MAGNIFICENT SEVEN). Their actions aren’t critiqued, any more than most movies would critique moviegoers for attending films about sex and violence.

The main attraction of WESTWORLD seems to be that of facing protagonists with what seems to be a phony challenge, and then forcing them to deal with the real thing. The Delos technicians are never completely sure as to what makes the androids usurp their usual program, so that the females refuse the guests sex and the males start killing both guests and technicians. Crichton probably knew that his audience would assume that, on some level, the androids were just sick of playing the fall guys all the time, so he chose not to gild the lily.

Like many films of the time, though, WESTWORLD takes its time to present the challenge. For about half the film, Martin and Blane entertain themselves enacting such rituals of Western manhood as the bar-fight and the jailbreak, but always with the confidence that they can’t really get hurt. A minor incident—an android rattlesnake biting Blane-- heralds the revolt of the androids in general, and shortly thereafter, Blane meets the Gunslinger Android, who outdraws and kills the unfortunate guest. Martin is thus obliged to run from the implacable robot until he finds a way to turn the tables on his pursuer. Oddly, even the violent dispatching of the robot has a muted quality, allowing Martin no particular glory from his accomplishment. (The immolation of the Gunslinger is succeeded by a curious scene in which Martin mistakes a female android for a human guest and accidentally “kills” her by giving her some water.)

Crichton’s debut as a film-director turns out to be a good journeyman job, but he was probably better served by concentrating on best selling fiction. Arguably, by 1973 westerns had started to decline both in film and on television, though it would take another decade for the decline to become obvious. WESTWORLD anticipates the way that fantasy-related genres would for the most part sideline the western genre, and so that might explain the iconic appeal of having Yul Brynner reproduce the image of a critically lauded western hero in science-fiction terms, taking the form of a mechanical murderer. That said, WESTWORLD isn’t rejecting the western genre in order to champion any deep fantasy-visions. Crichton’s structure is purely reactive in nature, and feels a bit like a cribbing from Rod Serling, but without a moral message. He continued his profitable association with cinema up to his death in 2008, but surely his most profitable cinema-franchise was JURASSIC PARK. In part this was a variation on WESTWORLD, but melded for cinematic purposes with the wonder-inducing priorities of Steven Spielberg, one of the many talents who promoted fantasy so ably that the noble western ended up on Boot Hill.

Posted by Gene Phillips at 4:55 PM
Email ThisBlogThis!Share to TwitterShare to FacebookShare to Pinterest
Labels: the marvelous