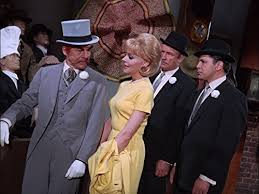 
DC Comics’ villain The Mad Hatter had a complicated history. Workhorse-writer Bill Finger created not one but two Mad Hatters—one in 1948 and one in 1956—and since the two did not resemble one another in the least, it’s pretty much a given that he meant them to be separate characters. BATMAN ’66 clearly modled its version of the Hatter on the character from 1956, not only because there’s a loose resemblance between the two mustachioed villains, but also because the TV-version shares the civilian name of the ’56 crook: the very Dickensian-sounding “Jervis Tetch.”

Finger’s original Mad Hatter is mad about only one thing: collecting all kinds of hats. He doesn’t care about committing crimes for profit, he only wants to add headgear to his collection—particularly one hard-to-get item: the cowl of Batman. This is pretty much his only goal in the original Finger story, and writer Charles Hoffman only borrowed one major scene from the comics-version: one where the Hatter lures Batman to a sculptor’s studio so that the hero will doff his cowl for a sitting.

In “The 13th Hat,” Jervis Tetch is not just tetchy about hats; he’s tetchy about vengeance on all those who sent him to prison earlier—meaning all twelve jurors on the case, and the chief testifying witness against him—namely Batman. In keeping with his garments and those of his two henchmen—which have an early 20th-century look to them—this Hatter (David Wayne) is as pompous as the Penguin, but has a pronounced air of sadism that verges on the erotic. This particular madness of the Hatter, masterfully captured by Wayne, is most evinced in a scene in the villain’s hat factory, wherein he shows off a variety of assembly-line devices supposedly used for hat-making, and lovingly describes the way he wants to see Batman’s body torn, stretched, and acid-soaked by those devices. His two thugs merely want to know their next caper, but the Hatter’s moll Lisa is a new type of female villain. Given her penchant for cheering the malcontent with all sorts of mod-sounding phrases—my favorite being where Lisa calls the supervillain a “pixie”—Lisa seems like an upscale type of thrill-seeker, a lady who turns to crime out of boredom rather than greed.


Another original element in Hoffman’s script is the Mad Hatter’s chief weapon. At his bidding, the top of the Hatter’s top hat pops open, and a pair of mechanical eyes spring forth, zapping anyone in range with a mesmerizing ray. This device comes in handy as the Hatter and his two thugs move about Gotham, easily knocking out the twelve jurors and spiriting them away for later ransom. (Hoffman does not explain why it takes either the main heroes or the police so long to figure out why the Hatter picks on these particular targets, nor why no one bothers to try heading off the villain until the second part of the episode.) The “Super Instant Mesmerizer” manages the achievement of seeming at once silly and creepy, though it’s not nearly as creepy as its user.

Alfred gets some extended business when the Duo send him to plant a bug on the last of the Hatter’s targeted jurors, but the butler’s contribution is rather bland this time round. The Mad Hatter’s money-making ploy has something to do with ransoming the collected headgear of all the American presidents, and though that doesn’t sound like a great plot, at least it does bring him back to his obsession with hats. The big end fight-scene is another standout battle for the series, thanks to the hat-factory set—implicitly a tribute to the many infernal machines seen throughout the classic years of American action-serials.

Curiously, though Hoffman did not write “Zelda the Great,” there’s an early line of dialogue in which Bruce Wayne extols the virtues of a sculptor named “Carnado.” Since this was the name of the character who was gender-switched to become the less-than-great Zelda, one must assume that Hoffman’s use of the name comprised some sort of in-joke, though after all these years, the point of the joke will never be known.

Posted by Gene Phillips at 12:55 PM
Email ThisBlogThis!Share to TwitterShare to FacebookShare to Pinterest
Labels: combative adventures, the marvelous