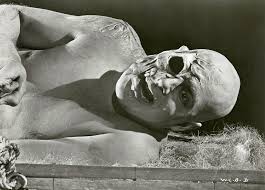 
Whereas AMAZING COLOSSAL MAN was something of an undercooked stew, COLOSSAL BEAST is more like a breezy, well-made souflee. It’s not any deeper or more mythically complex than the preceding film, but wtiter-director Bert Gordon gave the sequel a little more dramatic heft.

In COLOSSAL MAN, the viewer is asked to identify with the travails of Glenn Manning, a former military soldier mutated into a giant freak by radiation. While this gave rise to some quotable quotes for Manning, neither he nor his plight proved all that resonant. For the sequel, Gordon borrowed from his earlier giant-man outing THE CYCLOPS. That film dealt with a man who lost almost all of his memories after being giant-ized, and since COLOSSAL MAN ends with Manning getting blasted by cannons and falling off the Hoover Dam, the king-size monster was in the perfect position for Gordon to reprise his earlier scenario.

In both CYCLOPS and COLOSSAL MAN, the victim’s wife seeks to help her mutated husband. BEAST dispenses with Manning’s wife and brings in a never-seen-before sister, Joyce. She hears about reports of disappearing food trucks and elicits the aid of the military to learn if Manning is still alive.; He has indeed survived, though his face has been disfigured. This facial makeup made it easy for Gordon to replace the previous colossal actor Glenn Langan with Dean Parkin, who had essayed the Cyclops as well. Though the Colossal Beast is intelligent enough to seek out trucks as a source of food for his giant form, he’s lost his memory and cognitive skills. Joyce gets the army to capture Manning alive, but he gives no indication that he remembers her, or that he can attain humanity again. Thus the struggle accrues more suspense by virtue of the audience wonderig whether or not his mentality can ever be recovered. In addition, in contrast with the dozens of the films showing the military as ruthless monster-slayers, here the United States army is shown diligently trying to cure a damaged citizen, with no end beyond doing the right thing.

Since it’s a monster film, obviously things don’t end up sunshine and roses for Manning. Gordon pads the film with flashbacks to the undamaged Colossal Man, but even these don’t detract from the basic effectiveness of the plight of finding the “man” within the “beast.” While not Gordon’s best film, it easily makes it to the top three.

Posted by Gene Phillips at 1:35 PM
Email ThisBlogThis!Share to TwitterShare to FacebookShare to Pinterest
Labels: the marvelous