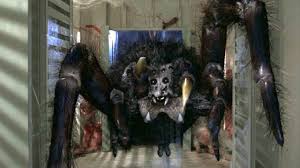 On the kinetic level these three arachnophobic outings are decent timewasters, though the spider-FX are ordinary and the scripts show no real fascination with the cosmological nature of spiders (though one mad scientist comments that the critters don’t get a lot of diseases).

Though all of the films take place on present-day Earth, the shadow of ALIEN engulfs all three of them. The first film asserts that some American intelligence-operation got ahold of alien DNA and for some reason decided to crossbreed the genetic material with that of Earth-spiders. Naturally, this results in some really big bugs who can’t be contained by secret scientific installations—or, for that matter, an experimental station on a space shuttle, where the spiders take over, laying their eggs in one astronaut before the whole megilla crashes to Earth. The initelligence-spooks take custody of the evidence, but local alien-conspiracy reporter Marci (Lana Parrilla) tips to the operation and infiltrates the installation with two other aides. The aides are of course there to be Red Shirts, but Marci makes friends with a friendly spook who helps her against the nasty one. After an hour-and-a-half of derivative ALIEN hijinks, the climax does deliver an impressive scene with Marci, reporter-turned-Rambette, destroys a King Kong-sized spider with a bazooka.

Maybe the production company blew their budget for two films on the first one, because SPIDERS 2 stays confined to a couple of ships out in the briny blue ocean. Young marrieds Jason and Alexandra have problems with their boat, and get ostensibly rescued by a bigger craft, one that has its own mad doctor (Richard Moll, always a welcome villainous presence). I didn’t catch any linkage between this rather limited experimental endeavor and the more ambitious one from the first film, but I suppose someone might’ve harvested a few alien spider-eggs for fun and profit. Jason becomes suspicious of the doctor and the rest of the crew, but for half the film Alexandra just thinks he’s being paranoid. She finally does have to stand by her man, not least because Crazy Doc wants to make him spider-bait, and she gets the honor of blowing away the last surviving arachnid at the climax.

We’re back to big, quasi-governmental conspiracies for SPIDERS 3D, and this second sequel had much better production values than the first one. However, though most of the action takes place on planet Earth, once again it all starts with a space station, though it’s a Russian one, crashing to Earth in the vicinity of the Big Apple. Some of the alienated spiders find their way into New York’s subway system and start looking for victims, so American spooks shut down the subway, much to the chagrin of subway administrator Jason Cole (Patrick Muldoon). When Jason investigates the mysterious happenings, both he and members of his family are targeted for abduction by the military, who all apparently report to another mad doctor, this one by the name of Darnoff. Apparently Darnoff, being Russian, had some extra intel on the Russian experiment—which may or may not have been connected with the one from the first flick—and he’s just salivating for the chance to breed spider-human mutants. The conspiracy aspects of the film are more entertaining than all the lame giant-spider tropes, and the performances are generally better, though Darnoff registers as the least interesting of the mad scientists.


Of the three films, only SPIDERS qualifies for the combative mode, but the series as a whole would be subcombative.

Posted by Gene Phillips at 10:55 AM
Email ThisBlogThis!Share to TwitterShare to FacebookShare to Pinterest
Labels: combative dramas, the marvelous