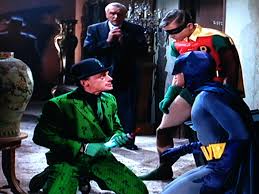 (NOTE: In reviewing any stories in the 1966-68 Batman series that consist of two or three episodes, I’ll reference those narratives only with the title of the first episode. Usually the ensuing titles of the later episodes consisted of puns too lame even for me to bother with.)

The character of the Riddler proved an appropriate choice for introducing non-fan audiences to the camped-up adventures of Batman and Robin, The dominant structure of the weekly show consisted of two interconnected episodes airing over two nights. This pattern was roughly modeled upon the suspense-building stratagem of cinema’s multi-chapter serials, which like the teleseries usually depended on putting a character or characters in physical danger. Riddles, too, are almost always two-part structures. One half sets up a bizarre situation with no obvious logical solution, and the riddle-listener’s suspense about the situation is dispelled when the solution, however illogical, is presented.
The uninitiated viewer also benefited from the use of the Riddler to introduce the world of the illogic of superhero comics, wherein costumed criminals deliberately leave clues so that costumed heroes can hunt them down. Batman views the Riddler’s compulsion in particular to be “artistic” in nature, though many of the other supercrooks on the show suffered from the same habit, and most villains are driven less by the prospect of gain than by the desire to outwit, defeat and destroy the Dynamic Duo.

Head writer Lorenzo Semple contributed the script to “Hi Diddle Riddle,” using for his template an original Gardner Fox comic book story, “The Remarkable Ruse of the Riddler’ (BATMAN #171, 1965). At the time of the story’s publication, the Riddler was not one of the Duo’s more seasoned foes, having only appeared twice in the 1940s. But the antic nature of the character may well have appealed to showrunners trying to pursue a two-tier approach to audiences: luring in kids with slam-bang superhero thrills and grabbing adults with touches of comical campiness.

“Ruse” is only a fair Batman-story. The Riddler, newly released from a stint in prison, immediately plots to return to his criminal career. However, before making his move, he pretends to have reformed, and plays mind-games with the heroes as they keep tabs on him. The cleverest scene in Fox’s tale shows the Riddler apparently robbing a museum-owner by holding a gun on him. When the heroes corral the Prince of Puzzlers, he humiliates them by revealing that the pistol is really just a cigarette lighter. Semple takes this scene and ups the ante: after Batman and Robin assault the Riddler, he files a million-dollar lawsuit against them. Thus Semple’s crimefighters are subtly ironized by being made vulnerable to legal chicanery.

Other divergences are less noteworthy. The Riddler has no female accomplice in the comics-story, much less a moll with the transparent name of “Molly.” In the original tale, the Molehill Mob don’t work for the Riddler, but are a separate gang of thieves whom the Riddler betrays as evidence of his good citizenship. More importantly, Fox’s Riddler doesn’t show any interest in killing his foes, while the Semple version designs a Machiavallian scheme to both pull off a big robbery and to kill his recurring enemies.

One thread in the villain’s labyrinthine scheme starts off with Riddler pulling what seems to be a simple prank at a function at a foreign embassy in Gotham, but this plot doesn’t see fruition until the story’s second part. A more prominent thread involves Riddler luring the duo to a go-go club, where Robin can’t enter due to his age. Inside the club Batman briefly dances “the Batusi”—one of the few times the show threatens to descend into burlesque rather than sticking to the camp aesthetic—and then gets doped by the contrivance of Molly. Outside the club, Riddler takes Robin prisoner, but this too is part of the plan to kill Batman.

I’m not sure even most kids in the audience, much less adults, would have bought that Molly, played by the curvaceous Jill St. John, could pull off a masquerade as the Boy Wonder. The masquerade works a little better the other way—teen boys played the roles of women in Shakespeare’s theater—but even if one believed that Riddler created a perfect Robin-mask and flawless Robin-costume for Molly to wear, how would she manage to feign having a man’s beefier arms? (Naturally, Molly-in-Robin-gear is always played not by St. John but by Burt Ward.) But the overall suspense of the narrative isn’t hurt by these niggling considerations. Batman does see through the disguise, though not for the reasons I’ve mentioned, and he even takes the phony Boy Wonder to the Batcave for their reckoning. The hero disarms the murderous moll in advance, and to juice up the life-and-death stakes of the narrative, Molly perishes by accident, making her one of a very small handful of true fatalities in the show’s three seasons.

Batman then tracks down the Riddler’s lair, but though he liberates the captive Robin, the villain escapes, albeit leaving behind another telltale riddle. The Riddler’s big score in the Semple story is far more impressive than the one in the Fox original. This approach is reflected in the show’s first big fight-scene, completing with all the ZAPS and POWS which conveyed excitement to kids and absurdity to adults (the latter reflected in the almost endless string of essays about comic books that worked ZAP and POW into the essay-titles). But aside from the sound effects, the fight-scenes were generally played straight, so that the kids—and maybe some adults—could luxuriate in the spectacle of pretend-violence.

For Frank Gorshin, the Riddler would become his defining role, and he invests it with a creepy, obsessive quality. Adam West and Burt Ward prove letter-perfect in both of their respective dual roles from the first scene to the last, though for this episode alone Adam West seems to be suffering from a bad case of five-o’-clock shadow. I’m sure some critics have turned cartwheels over the gender-bending nuance of Molly’s Robin-masquerade. Frankly, if it’s the thrill of gender fluidity a critic wants, he’d be better off watching any production of “As You Like It.”

Posted by Gene Phillips at 11:32 AM
Email ThisBlogThis!Share to TwitterShare to FacebookShare to Pinterest
Labels: combative adventures, the marvelous