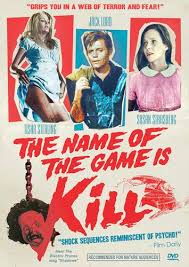 Given that Gunnar Helstrom’s NAME looks every bit like your typical low-budget horror-thriller, I was surprised to find out via the Net that Gary Crutcher’s script was briefly considered as a directorial project by both Roman Polanski and Rock Hudson. Thanks to the stunning cinematography of Vilmos Zigmond, NAME looks better than many more expensive films, though the peculiar title-- never really explained by anything in the story—inevitably suggests the down-and-dirty world of exploitation movies.

NAME is something of a cross between a forties film noir and THE TEXAS CHAINSAW MASSACRE. Viewpoint character Sym (Jack Lord) is a Hungarian immigrant who, for reasons not disclosed, finds himself hiking through the deserts of the American Southwest. The viewer never knows much about Sym’s past, except that he lived through violent turmoil in his native land, which may be a key reason for his becoming a rootless wanderer.

His wandering comes to an end when an attractive brunette named Mickey (Susan Strasberg) drives by in her car and gives him a lift. After explaining that there are no lodgings in the nearest town, Mickey invites Sym to spend the night at her place of residence, a last-chance gas station in the wilderness, subsisting on the commerce of tourists who pass through but never stop. Mickey shares her dwelling with her mother, portly Mrs. Terry, and her sisters Diz and Nan. The materfamilias is friendly enough to the newcomer, but Diz gives Sym static, while Nan, a high-schooler newly expelled from school, signals eccentric flightiness. Sym is confident that Mickey didn’t just pick him up out of Christian charity, and when they’re alone, he makes a pass. Mickey refuses and leaves Sym flat, so to speak. Sym returns to his designated bunk and finds a rattlesnake in his blanket. Is it one of the ones the family keeps as pets, along with a cage full of tarantulas? Sym doesn’t wait to ask questions, he just takes to the road.

However, someone at the station doesn’t appreciate his secret leavetaking, for while he’s walking along a car comes along and slams the Hungarian off the road. Some Samaritan finds his broken body and takes him into town to be doctored. During Sym’s slow recovery the local sheriff takes the victim’s statement. The lawman also mentions that the Terrys have been involved in other fatalities, though none can proven to be homicides. So what does this rootless wanderer do with this information?

Why, he does what all doomed noir protagonists do: he “runs to death,” as the poem has it. He hoofs his way back to the filling station, suddenly wanting to see Mickey again. He first encounters Diz instead, who tries to get him to make love to her instead. When the besotted Romeo decides to be true to his first choice, Diz references the family’s weird history, during which their father committed suicide after beating the sisters’ mother.

Mickey welcomes Sym as if there had been no difficulties between them, and on the surface everyone seems reconciled to their being engaged. But perhaps Sym is half in love with easeful death, he can’t help picking at the family tragedy. The film’s big reveal, resembling that of PSYCHO but with an opposite meaning, is that Mother is actually Father in drag. Far from being an abusive drunk, Mr. Terry was a sensitive artist who couldn’t deal with his wife’s catting around—and one of the girls, her Electra complex on full display, kills her evil mother. Yet, despite the fact that Mr. Terry seeks to replace the girls’ maternal influence, it would seem that the mother’s corruption breeds true. In one way or another, Diz, Nan and Mickey are all psycho girls, and the film ends on the implication that Sym will meet the fate he secretly covets.


To be sure, the Crutcher script only suggests these psychological complexities, but at the very least, it should be evident that NAME OF THE GAME IS KILL isn’t sedulously imitating any single narrative. Most of Helstrom’s other directorial work in America consisted of TV episodes, but Crutcher has other interesting writing-credits: the wacky action-comedy SUPERCHICK and the snake-horror flick STANLEY.

Posted by Gene Phillips at 2:16 PM
Email ThisBlogThis!Share to TwitterShare to FacebookShare to Pinterest
Labels: perilous psychos (u), the uncanny, weird families and societies (u)