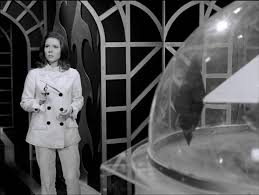 At its best, the British AVENGERS series was one of the more piquant of the “superspy” TV shows of the sixties. Though the James Bond craze certainly influenced the series in the course of its development, the program slightly predated said craze, having had its first episodes the year before the first Bond film appeared in 1962. Of course Ian Fleming’s books had been in print since 1953, but the few surviving episodes from THE AVENGERS’ first season don'tt seem to have much in common with the prose-fiction Bond. In the first season John Steed (Patrick MacNee) as some sort of vague agent working on behalf of Great Britain. After the actor playing Steed's first-season partner departed the show, Steed was partnered with a succession of helpers, most of whom were, to re-use an old phrase, “talented amateurs.” Whereas Bond occasionally allied himself to amateurs in a given novel, the idea of having an agent regularly team with a non-professional is, if not wholly original, modeled upon some other influence than that of Fleming’s creation.

Without discounting the virtues of the second and third seasons, wherein Steed was most often teamed up with Cathy Gale (Honor Blackman), the producers of the show seemed to hit their stride with the fourth and fifth seasons, a.k.a. “The Emma Peel Years.” THE AVENGERS had always an escapist show, immune to the vicissitudes of real life, but during these two seasons—including the show’s season in color—the plots made greater uses of science-fiction tropes, possibly reflecting the emphasis of such content in the Bond movies. And while Steed continued to dress conservatively, Emma Peel (Diana Rigg) arguably became the epitome of Mod London, usually attired in a variety of sporty outfits, not least form-fitting bodysuits. Most of the episodes in the Emma Peel Years were well-crafted adventure-tales in which someone-- Steed, Emma or a victim under their protection-- suffered the affliction of bizarre schemes, often involving “mind game” techniques.

Most of these episodes, though, can’t be said to have much mythicity, perhaps because they maintained a consistent tongue-in-cheek attitude. “The House That Jack Built,” however, manages to use both SF-tropes and the mind-game trope to bring forth greater symbolic resonance.

The episode opens with an incident that takes place weeks if not months before the main story, though this isn’t immediately clear. Escaped convict Burton, fleeing prison guards and hunting-dogs, enters a seemingly deserted mansion. Inside, he’s apparently attacked by a lion—and then the main story begins.

Emma drops by Steed’s flat, explaining that she’s going out to the country to see the mansion of her Uncle Jack. She doesn’t remember meeting such an uncle, but since she received a letter about a legacy from her solicitor, she drives down to check out the house she’s inherited. Once she’s gone, though, Steed—who was busy developing photographs—notices that his prints all seem to have been damaged as by radiation, apparently from the keys given Emma by the solicitor. Steed phones the solicitor, who denies having sent either letter or keys, and who doesn’t believe Emma had an Uncle Jack. The regular viewer would expect Steed to dash after Emma to investigate, but since the writer wanted more complication, the agent calls an ally to intercept Emma. (Maybe he was already in the area?) The agent, disguised as a scoutmaster, does manage to bum a ride with Emma, getting out when she arrives at Uncle Jack’s mansion. The script supplies a flimsy reason as to why the guy doesn’t explain the reason for his surveillance, but clearly the real reason was to give the audience a little extra uncertainty.

Once Emma uses her keys to enter the mansion, she’s well and truly trapped when the doors seal her in. Further, she enters a room containing nothing but a terminal with a revolving object that hums rhythmically as it spins. Having got there, Emma can’t seem to get away from the room, as every door keeps leading her to the same unnerving sight. The talented amateur eventually works out that the rooms are revolving to bring her back to the same location, and this knowledge allows her to find her way to other levels in the mansion. (She also encounters the lion, a manufactured illusion.)

She’s attacked by the convict Burton. After beating him down, she realizes that he was caught in the trap meant for her, and that he’s gone mad from his long imprisonment. Appropriately, though he doesn’t know the name of the phony uncle, he keeps repeating verses from the nursery rhyme “The House That Jack Built.” Though he too apparently got out of the revolving room somehow, the experience has broken him, and the verses are his way of coping with the endless recursiveness of his experience.

A voice, apparently that of Emma’s antagonist, leads her further into the room that controls the house’s mechanisms, but she finds that she can’t damage any of the apparatus. Eventually Emma learns that the voice is that of the master computer, and the computer’s builder is an old enemy, Professor Keller. Keller himself has died, but he’s left a pre-recorded speech to inform Emma of his triumph. Years ago, when Emma was the head of her father;s industrial concern, she dismissed Keller from his position. Keller advocated the superiority of machine to man, and the elimination of workers from all industry—which did not go over well with humanist Emma. Like many mad scientists before him, Keller decides to prove his theories with an object lesson: building a computerized house designed to keep Emma alive but imprisoned, to impress on her the superiority of the machine. Eventually, the computer explains, she’s expected to kill herself with a suicide booth. Burton hears this, and immediately avails himself of the booth.

Before Steed arrives on the scene, Emma proves the superiority of human wit to a programmed device. Thanks to Burton having brought a shotgun and shells in with him, she uses gunpowder from one of the shells to booby-trap her access-key, so that it enters the more delicate interior of the computer and short-circuits everything. She then saunters forth, greeting Steed in such a way as to mock his chivalrous rescue-attempt: “What happened to the shining armor?” To be sure, there had been, and would continue to be, episodes where Steed pulled Emma’s chestnuts from the fire. But given that this episode’s threat was based on an incident from her past, it was quite appropriate for her to save herself here, since this would disprove Keller’s anti-humanist theory.

The only downside of the episode is that, though the Emma Years were usually marked by well-crafted hand-to-hand fights, neither of the heroes has a chance to show off their physical skills. But it’s still refreshing to see a story that relates a little more to some of the dilemmas raised by the “rise of the machines.”

Posted by Gene Phillips at 12:33 PM
Email ThisBlogThis!Share to TwitterShare to FacebookShare to Pinterest
Labels: combative adventures, the marvelous