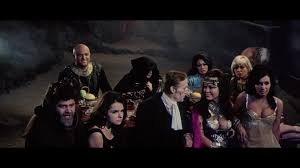 I’m glad that some online review mentioned that WITCHMAKER was the first exploitation-film to take advantage of the trope of “Satan-worshipping witches” after 1968’s ROSEMARY’S BABY popularized the concept. Without that insight, I would not have been able to assign the flick any significance at all. WITCHMAKER isn’t even bad enough for the “so bad it’s good” category.

The film was producer, written and directed by William O. Brown, who had one previous producer-director credit to his name, and nothing afterward that made the IMDB files. Two experienced actors, L.Q. Jones and Alvy Moore shared producer credits, and Moore, best known as “Hank Kimball” on GREEN ACRES, has a supporting role. The basic setup seems promising. Four young women have been murdered in a Louisiana bayou, and witches are suspected. A psychic research team-- comprised of Moore, Anthony Eisley and Thordis Brandt-- shows up to investigate. Eisley’s character seems to be woefully ignorant of the concept of witches, prompting Moore to provide lots of exposition. Brandt’s character is a full-fledge psychic medium, but her ability proves of even greater interest to the murderous witch-cult than her good looks.

Brown devotes little attention to his psychic detectives, though, saving all of his efforts for Luther, the leader of the sacrificial witch-cult, and an unaligned witch named Jessie. Luther convinces Jessie to work with him so that she can not only convert the medium character to Satanism, but also so that the old witch can take over the young woman’s body. Thus the two sorcerers are the stars of this show. However, Brown gives the villains only the barest of motivations and no real backgrounds, so they’re not much better than the heroes. On top of that, though Brown did a little research on his topic—mentioning at one point the witches’ “flying ointment,” allegedly a hallucinogenic drug—he also feels free to make up any old thing he pleases about his malefic magicians. For some reason Luther is called a “Berserk,” but what if anything this has to do with the Norse tradition of Berserkers is anyone’s guess. There is a fair amount of appealing nudity, thanks to the fact that most of the witches are hot young women, but overall even the orgy’s rather lame. The film’s one moment of inspired idiocy features Luther chasing Eisley and Brandt and flinging magic spells at them, but he keeps missing them, so that they make the nearby trees explode, just as if they had explosive charges set in their boles.

Given that Brown’s witches are rather bland, he might’ve done better to emulate ROSEMARY’S BABY in beefing up the roles of the good guys and allowing the witches to be more mysterious. As the movie stands, the only point of special interest is that of seeing Alvy Moore play a “straight” version of his officious GREEN ACRES character.