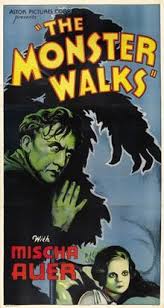 
The main point of interest in this creaky “old dark house” mystery appears in the family dynamics underlying the mystery’s solution. Ergo, SPOILERS all around.

Rich Mr. Eartlton has passed away, and his family gathers at the family manse for a reading of the will. Family members in attendance are Earlton’s invalid brother Robert and the dead man’s daughter Ruth, who brings along her fiancée, Doctor Clayton. There are also two creepy retainers, Mrs. Krug and her grown son Hanns, played by Lugosi-esque élan by Mischa Auer. The will is read, and Ruth inherits most of the estate, though in the event of her death, Uncle Robert inherits. As for the servants, they both get a miniscule sinecure. But there’s one part of the estate not much discussed, for the late Earlton was some sort of scientist with an interest in evolution—which explains why there’s a big ape caged down in the mansion’s cellar. (This is the “monster” of the title, an anthropoid named Yogi, who looks too big to be a chimpanzee yet too small for a gorilla.)

After the will’s been read—at night, as is so often the case in old dark house movies—everyone—the family members, the servants, and Doctor Clayton’s comical Negro manservant Exodus—goes to bed at at the mansion. In Ruth’s room, she’s awakened from sleep by a hairy-looking hand, snaking out of a wall-panel to threaten her. Yogi the Ape appears to be still locked in his cage, though Hanns claims that the creature once displayed the ability to pick the lock and get out. Poor invalid Uncle Robert, who dotes on his niece in every scene they’re in together, believes that Ruth just had a bad dream. Then, to ease Ruth’s nerves, Mrs. Krug exchanges beds with the young woman—and the hairy hand comes forth onec more, strangling her.

Despite the title, though, the ape never “walks” out of his cage, so there are no uncanny “astounding animals” here. Rather, the owner of the ape-hand—simulated with the use of a furry glove—is, unsurprisingly, creepy Hanns. He’s actually the bastard son of Uncle Robert, who apparently had a fling with the late Mrs. Krug. The two men conspired to kill Ruth and blame Yogi for the crime, after which they would share the inheritance. However, Hanns is more than a little pissed that his father’s grand plan resulted in Hanns killing his own mother. So Hanns strangles Daddy Robert as well, and then decides to go for broke by dragging his cousin down to the cellar. He whips the ape several times, trying to make it mad enough that when he releases it, it’ll kill Ruth. But Hanns gets too close to the cage, and Yogi proves he’s smarter than the average caged ape. The other characters show up to rescue Ruth, and virtue is rewarded.

While the acting and direction is just fair at best, the rather lurid content distinguishes MONSTER from the run-of-the-mill old dark house flick. The film ends with the comic relief making a standard racist joke of the day, about how he had an uncle who resembled Yogi—but if anything, there's more likeness between Yogi and Hanns.


A number of the players had credits stretching back to the silents, as with director Frank Strayer, though these days his handful of horror films remain his claim to fame, particularly the Lionel Atwill film THE VAMPIRE BAT. Sheldon Lewis, a.k.a. Uncle Robert, had the distinction of playing not one but two of the masterminds defeated by serial queen Pearl White: the Clutching Hand and the Iron Claw. (Both silent serials were later remade in the sound era, and have been reviewed here and here.) Rex Lease (Clayton), Mischa Auer (Hanns) and Willie Best (Exodus) all made their respective marks a bit later, Lease scoring largely with westerns and Auer giving up “heavies” like Hanns in favor of goofy comical types following his success in the 1936 MY MAN GODFREY.

As for Willie Best—regrettably billed with the insulting epithet “Sleep ‘n’ Eat” at this point in his career—he spent most of his career playing frightened Negroes. His character Exodus is not the worst of the lot—at least he speaks relatively well and he briefly carries a gun to defend himself against the ape. I was tempted to believe that his name might be as much an insult as his billing, since the Biblical Exodus was all about the freeing of Jewish slaves. However, it’s probably more likely that the name was meant to signify the character’s constant desire to make an “exodus” away from any place of potential danger.

Posted by Gene Phillips at 1:56 PM
Email ThisBlogThis!Share to TwitterShare to FacebookShare to Pinterest
Labels: astounding animals (n), outre outfits (u), the uncanny