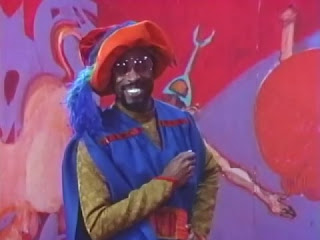 Adam Wainwright (great name!) is a man of many parts. He became obsessed with sexuality after an early exposure to the paintings of Hieronymus Bosch. This led, in some fashion, to his being condemned for performing a dirty song on the Ed Sullivan Show, after which he becomes “the Black Bandit,” devoting himself to stealing smutty films from theaters. But his thievery has nothing to do with the plot, such as it is. Rather, Adam seeks help from a psychiatrist, who tells him that everything in his fantasies is a reflection of Freudian hang-ups—which the viewer can’t judge, not seeing anything of Adam’s early life. The therapist gives Adam LSD, which provides the film’s only metaphenomenal content, as the schnook starts having wild fantasies. These include cavorting with unclad followers before a giant penis and talking to the Dutch painter Hieronymous Bosch, who just happens to be black (as well as the best actor in the movie). I might theorize that Dobbs was trying to emulate the avant-garde theater of this period, particularly with respect to using a black actor for a non-black role, as JESUS CHRIST SUPERSTAR had done for the character Judas.

Despite some esoteric references to Freud and Gnostic Christianity, clearly Dobbs had no real plan here, so ROSELAND is nothing but pretentious twaddle. Yet it’s still a little more entertaining than my other seventies selection, NINE LIVES OF FRITZ THE CAT. This adult-rated animated feature was a sequel to Ralph Bakshi’s FRITZ THE CAT, freely adapting Robert Crumb’s comic-book character. But whereas the Bakshi film was lively enough to earn good box office as a midnight movie, NINE feels like the animators just threw together a bunch of aimless fantasies, possibly thinking that their viewers were all stoners who wouldn’t remember a narrative anyway. 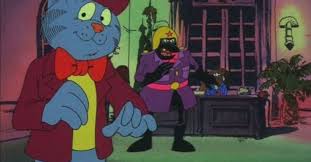 NINE’s basic idea is that henpecked Fritz, nagged by his heavy-bodied cat-wife, leaves home and starts telling strangers about the glamorous “other lives” he’s lived as a cat. The only scenario that had a half-decent concept dealt with a future in which a black separatist state in the U.S. (run by crows, of course) threatens to make war on the government. The state’s actual intention is to surrender, in order to force the country to render military aid, but this backfires, and Frtiz is right in the middle of it. The film’s perhaps interesting as a time capsule, but director/co-writer Robert Taylor never manages to ccme up with anything remotely funny.

Posted by Gene Phillips at 1:29 PM
Email ThisBlogThis!Share to TwitterShare to FacebookShare to Pinterest
Labels: delirious dreams and fallacious figments (u), the marvelous, the uncanny