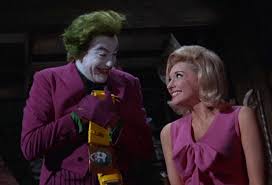 The script for Cesar Romero’s debut as the Crown Prince of Crime comes from the penn of Robert (son of producer William) Dozier. Robert Dozier apparently liked the “universal language” bromide that Semple had Bruce Wayne toss at Dick Grayson at the beginning of “Fine Feathered Finks,” since Dozier more or less re-uses the same schtick.

Most of “Wild” follows the pattern of a 1952 Bat-tale by David Reed, “The Joker’s Utility Belt,” though the episode’s opening is all-original. The Joker receives permissive treatment by Warden Crichton (who debuted in the previous episode), and the “Chaplain of Chicanery” (as the script calls him) breaks out of stir with the help of a giant jack-in-the-box spring.

After the Duo confer with the always-harried Commissioner Gordon, the heroes figure out that the Joker’s next target is a museum whose display on great comedians failed to acknowledge the Joker’s contributions to comedy. In the comics-story, the Joker and his thugs simply invade the museum after-hours, but Dozier plays up the situation, as the heroes deduce that the Murderous Mountebank doesn’t plan to break in, since he and his thugs have always smuggled themselves in, so that they can “break out” at their leisure. In the fight between heroes and villains, the Joker temporarily prevails, but Batman wins freedom for himself and Robin by hurling a gas-weapon from his utility belt. Joker escapes, but swears to outdo his enemy. Later, he comes up with his own utility belt, which contains assorted joke-related weapons, which he shows off to his moll Queenie (definitely not in the comic-book tale). The Hateful Harlequin’s dialogue with his moll leads him to conceive of his next grand scheme—which, unfortunately, is probably the weakest aspect of Dozier’s script, and one not present in the Reed original.

In “Utility Belt” Joker attempts to rob an opera performing “Pagliacci,” but the setting is incidental, since the only purpose of the scene is to show the villain thwarting the cops with his new arsenal of weapons. Dozier builds up the opera-scene by having Batman and Robin storm the scene, only to be captured by Joker’s thugs. The cliffhanger consists of the villain threatening to unmask the heroes on national television, and in retrospect this threat of exposure proves more resonant than many of the death-traps. The heroes break free but Joker escapes again. In the comics-tale the villain’s next plot is to rob wealthy art-collector Laughwell, and Dozier expands this germ to include a humorous grammar-lesson from butler Alfred—the first of many moments of dry wit from the excellent Alan Napier. The Laughwell robbery duplicates a scene in the comic, in which Joker manages to slip a copy of his own nefarious belt onto Batman’s body, so as to further confound the heroes’ attempt to stop the thieves. Naturally, the comic-book story does not make any witty references to “hitting below the belt.”

The final act involves Joker capturing Batman and Robin at a ship-christening, which action follows that of the comics-tale. However, Dozier introduces the idea that the villain tries to blackmail the authorities with the Duo’s lives, and the ransom Joker wants is—the ownership of an ocean-liner? True, not all of Joker’s thefts have to make sense, and Romero certainly sells the idea of the fiend as being above “mere petty pilfering.” But one can’t help but wonder what use a fugitive criminal would have for an ocean-liner, and I suspect Dozier just threw in this waggish motive as a lark. The episode does conclude with one of the show’s best fight-scenes, though, and with a comical scene in which Queenie tries to seduce straight-arrow Batman, who calls her a “poor, deluded creature.”

Dozier also puts across one of the better camp-touches of the first season. At a point when the Dynamic Duo seem helpless to prevent Joker’s crime-wave, a TV newsman relates a sentimental tale of his eight-year-old son praying for Batman and Robin. Later, after the heroes’ triumph, the same newsman references the famous “Yes, Virginia, There is a Santa Claus” essay by claiming that he told his son, “There is a Batman.” This represents one of the best-realized examples of the show’s camp aesthetic, playing most of the story straight but throwing in little undertones of mockery.

Posted by Gene Phillips at 11:58 AM
Email ThisBlogThis!Share to TwitterShare to FacebookShare to Pinterest
Labels: combative adventures, the marvelous