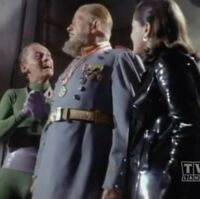 
Writer Fred De Gorter achieves the signal honor of being the first scripter on BATMAN ’66 to pen an episode not directly based on a comic-book story. However, “Riddle” borrows a few motifs from Semple’s debut script, “Hi Diddle Riddle.” In the earlier story, Riddler hung out with the Molehill Mob, who retreated to Gotham’s sewers to avoid the law, and this time, without missing a beat, Riddler has a similarly themed gang of henchmen, the River Rats. He does eschew the motif of the super-sexy moll, as the only female member of the gang is an annoyingly chirpy youth named Mousey, so she seems less likely to be Riddler’s squeeze than just a criminal thrill-seeker. In the debut episode, Riddler involved himself wth a foreign diplomat to commit his big score. Here, the Prince of Puzzlers preys upon King Boris, ruler of a small Euro-principality, but only so that he cnn use the unwitting king as a dupe. And once again, Riddler seeks to ace Batman and Robin before undertaking his main plot. After leading the Duo hither and yon with his riddles, the villain finally traps them, and puts them both in a deathtrap. Yet, despite how important their deaths are to him, this also marks the first time that a villain simply walks off, rather than watching the heroes perish. Not only does this make it easier for the heroes to escape through the use of Batman’s utility belt—which Riddler didn’t have the foresight to remove—the villain then operates under the delusion that his greatest adversaries are dead.

Riddler’s main plot involes extorting money from Gotham by threatening to blow up their version of the Statue of Liberty. This dull scheme is made even direr by Riddler’s use of one of his henchmen to dress up like Batman in order to foment the ransom-payment. This ploy might not have been so ghastly, except that the henchman is so bad in the role that even the dunderheaded Commissioner Gordon notices the imposture. There’s not much campy content and the final fight-scene is ordinary. The episode’s only distinction is that it gives Frank Gorshin some choice scenes in which he gives voice to the supervillain’s manic energy.

Posted by Gene Phillips at 12:47 PM
Email ThisBlogThis!Share to TwitterShare to FacebookShare to Pinterest
Labels: combative adventures, the marvelous