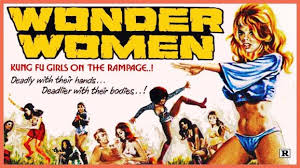 Due to the DC Comics character, this Phillipines-lensed oddity often circulated under other names, most often sold to TV as THE DEADLY AND THE BEAUTIFUL. I choose to review it with the name I saw it under, not least because one of the film’s best features is a bouncy little theme song with the same title.

To be sure, one can count those “best features” on the fingers of one hand. I suspect the screenwriter had seen at least one of the two “Sumuru” movies then extant, since the ruler of the wonder women not only sports a similar name, “Doctor Tsu,” but also has her own private island from which she operates her all-girl army. But in one sense Tsu (former A-lister Nancy Kwan) resembles Sumuru less than the many cinematic incarnations of Doctor Moreau. She pays her bills by having her girls abduct prominent athletes, whose organs she transplants to wealthy recipients. But Tsu’s true passion appears to be coming up with all sorts of freakish Frankensteinian abhumans. If she plans to conquer the world, she hides it well.

Tsu’s girl commandos—always dressed in form-flattering costumes—evince the attitude of classic supervillains: when you want to kidnap someone, do it out in the open so that you’ll be able to stomp any cops or public-spirited citizens who try to interfere. Such scenes might have been more appealing, had the dimestore production given the actresses any lessons in good fake-fighting. When I saw the film in my twenties, I thought the stuntwork was pretty good, but now most of the action-scenes look pretty phony, even from Roberta Collins, the girl who beat Pam Grier in THE BIG DOLL HOJSE. Still, the general hottitude of the women does inspire a certain amount of “wonder” anyway.

Insurance investigator Harben (a dreary Ross Hagen) comes to the Phillipines looking for a missing jai alai player. Probably if Tsu’s agents had just stayed away from him, he would have chased his tail from then on, but Tsu sends one of her lady assassins, Linda (Maria d’Aragone) to seduce and kill Harben. Linda succeeds at the first, but though she and Harben have a good cheap fight, Linda finally has to run. Harben is captured and taken to “Transplant Island” by other members of the seduction squad. There, in addition to showing off her vivisected victims, Tsu has “brain sex” with Harben. This comedic scene is probably the film’s highlight, in that Tsu gets mildly stimulated by the experience while Harben dissolves into a figurative puddle—though neither has touched the other’s body.

Tsu makes her main mistake by trying to punish Linda for her failure, for Linda foments a rebellion against Tsu, setting free both Harben and the monster-men. Yet Tsu escapes the forces of the law despite the ruination of her island-enclave, and in a coda, the triumphant hero loses out to the empowerment of women. In addition to this rare turnaround ending, WONDER WOMEN’s only noteworthy aspect is that it’s one of the few times that a starring Asian villain was actually played by someone of Asian ancestry.

Posted by Gene Phillips at 5:19 PM
Email ThisBlogThis!Share to TwitterShare to FacebookShare to Pinterest
Labels: combative adventures, the marvelous